View all macro and energy indicators in the Paraguay energy report

Total energy consumption stands at 1 toe/capita and electricity consumption at 1 920 kWh/capita (2020), which is 20% below the South American average. 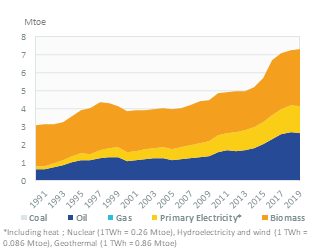 View the detailed fondamentals of the market at country level (graphs, tables, analysis) in the Paraguay energy report

The National Development Plan (2014-2030) set a target of 60% of renewables in total energy consumption by 2030. In order to achieve this objective, the country authorizes private investment in renewable energy. IPPs are allowed to sell renewable electricity directly to companies or electricity distributors. The national electric utility ANDE will have to bid to buy this electricity.

Paraguay updated its NDC in 2021 but has kept the same target as in its first NDC, which is to reduce GHG emissions by 20% in 2030 compared to a BAU projection (10% conditional target and 10% unconditional).