View all macro and energy indicators in the Ethiopia energy report

In 2020, total energy consumption per capita is around 0.4 toe, including 95 kWh of electricity. 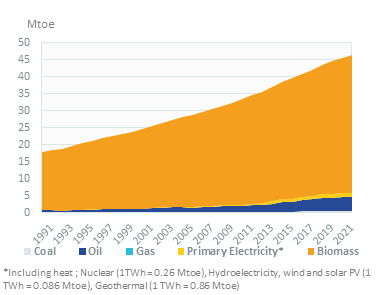 View the detailed fondamentals of the market at country level (graphs, tables, analysis) in the Ethiopia energy report

Since the closure of the Assab refinery in 1997, the country has imported all its oil requirements (about 5 Mt in 2020).

The MoWIE has been contemplating the possibility of introducing a feed-in tariff system. A draft bill was prepared and submitted to the MoWIE by EEA in 2012, but it has not been passed into law yet due to the lack of private sector participation. The revision process is still in progress.

According to its revised NDC (July 2021), Ethiopia plans to reduce its GHG emissions by 14% in 2030 compared to a BaU scenario. This is equivalent to a reduction of 56 MtCO2eq, which could be increased to 68.8% depending on international support.

The National Forestry Law, voted in 2018, aims to restore degraded lands and forests (22 Mha by 2030). It increases conservation concerns and state responsibility for such protection, as well as the participation of rural communities in the process, and local and sustainable exploitation of the resources.