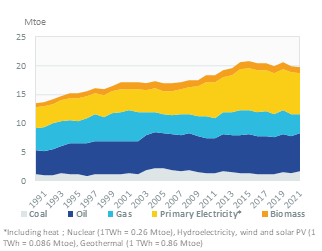 View the detailed fondamentals of the market at country level (graphs, tables, analysis) in the New Zealand energy report

The 5 main oil and condensate fields are Maari, Pohokura, Mau Mangahewa and Kupe.

NZEECS 2017-2022 has set a target of 90% of renewables in the power mix by 2025 (primarily hydro and geothermal). The latest NDC of the country underlines that the Government has a goal of 100 % renewable electricity by 2035.

In 2019, the Government released its new energy and climate plan to become carbon neutral by 2050 (except for GHG emissions from the agricultural sector).