View all macro and energy indicators in the Jordan energy report

Oil is the country's main energy source, with 52% of total consumption, followed by natural gas with 38%. 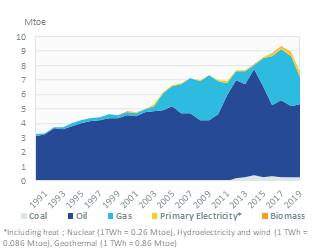 View the detailed fondamentals of the market at country level (graphs, tables, analysis) in the Jordan energy report

The country has a refinery in Zarqa with a capacity of 102 600 bbl/d. Jordan imported 2.1 Mt of crude oil in 2020. This decrease follows a long-term increasing trend of crude oil and oil products between 2010-2015, which was related to a significant rise in the consumption of fuel oil for electricity generation.

The oil consumed in the country is imported from Iraq, Saudi Arabia, or Europe.

In 2012, ERC adopted a feed-in tariff system for net metering; it is designed to reduce energy demand and allows the sale of any surplus energy generated back to the national grid.

In its updated NDC, Jordan strives to reduce its greenhouse gas emissions by 31% in 2030. A maximum of 5% of this reduction contribution will be unconditionally fulfilled by the country's own means compared to a BAU scenario. The country aims to increase the share of renewables in its power mix to 35% by 2030 (19% in 2020) and to improve efficient energy consumption in all sectors by 9%.