View all macro and energy indicators in the Greece energy report 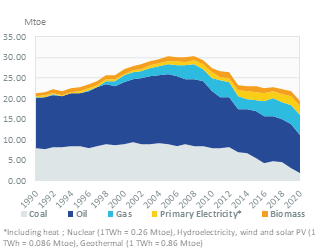 View the detailed fondamentals of the market at country level (graphs, tables, analysis) in the Greece energy report 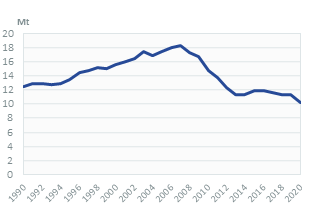 Since 2015, natural gas consumption has been rising and stood at an all-time high of almost 6 bcm/year in 2020. It increased strongly between its introduction in 1997 and a peak of 4.7 bcm in 2011. Subsequently, it fell at a pace of about 14%/year until 2014 due to the economic crisis and the decrease in power generation.

The electricity sector absorbs 65% of the total gas consumption, industry (including non-energy uses) 15% and buildings 12%.

Lignite consumption reached an all-time high in 2004 (72 Mt) and has been falling since then to 15 Mt in 2020. Nearly all the lignite consumption is used by the electricity sector and the current decrease in demand is explained by changes in the power mix (rising gas-fired and renewable generation). 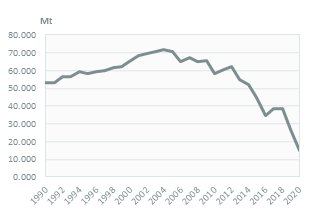 Services and households are the largest consumers of electricity (36% and 32%, respectively), followed by industry (24%). 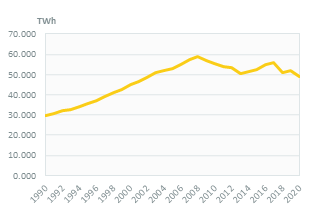 Under its NECP, the country targets a 35% share of renewables in final energy consumption in 2030, including 60% for electricity, 40% for heating and cooling, and 14% for transport. In the NECP, a target of 2 GW of offshore wind is set for 2030 (fixed-bottom and floating projects).