View all macro and energy indicators in the Mauritania energy report 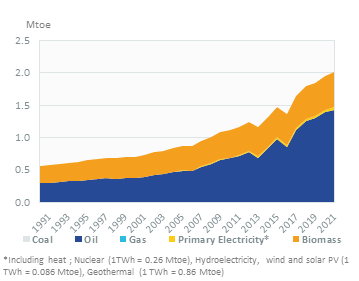 View the detailed fondamentals of the market at country level (graphs, tables, analysis) in the Mauritania energy report

Oil production started in 2006 at the Chinguetti oil field at a level of 1.5 Mt, but was halved in 2007 and has almost disappeared since then (0.13 Mt in 2018). This situation was mainly due to technical difficulties (geological problems, maintenance, gas leaks, false alarms, closure of a well, rise in the level of water, etc.) and the geological structure of the field.

The country's only refinery stopped operating in 2000.

In the SCAPP, the Government has set the objective to reach a share of 50% in the "energy mix" in 2020, but the scope of this objective remains unclear.

In its NDC (Nationally Determined Contribution), the country set a GHG emissions reduction target of 22% in 2030, compared to a BAU scenario. The actual target will depend on the availability of international support for financing, capacity building and also technology transfer.