View all macro and energy indicators in the Uzbekistan energy report

Uzbekistan's energy intensity was among the highest in the world, but is now decreasing very rapidly (-6%/year since 2000).

Gas represents most of the country's total energy consumption with 83%, followed by oil with 10%, coal and lignite with 6%, and hydropower with 1% (2020).

View the detailed fondamentals of the market at country level (graphs, tables, analysis) in the Uzbekistan energy report

In 2017, Russia started to supply oil to the country through the Omsk-Pavlodar-Shymkent pipeline (12 Mt).

The first competitive auction to develop a utility-scale solar plant (100 MW) in the Navoi region was closed in 2019. In 2020, bidders were pre-qualified for two tenders offering 600 MW of solar capacity (200 MW in Surkhandarya region and 400 MW under the Scaling Solar 2 project). In early 2022, the government awarded 1.1 GW of solar capacity to Masdar.

In its updated NDC, the country plans to reduce specific emissions of greenhouse gases per unit of GDP by 35% by 2030 from 2010 levels. In January 2021, it signed an MoU with the EBRD to reach carbon neutrality by 2050 by developing renewables capacities. 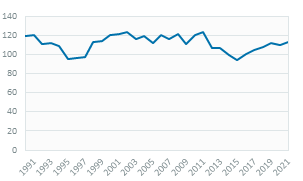