View all macro and energy indicators in the Kenya energy report 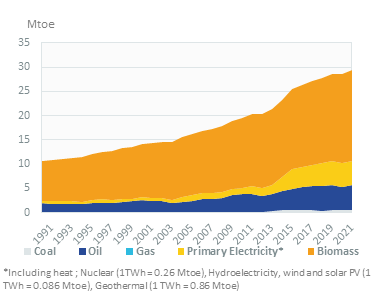 Since 2010, total energy consumption has increased by an average of 3.6%/year.

View the detailed fondamentals of the market at country level (graphs, tables, analysis) in the Kenya energy report

Kenya does not produce oil. The country has four petroleum exploration basins including Lamu Basin, Anza Basin, Mandera Basin, and Tertiary Rift Basin. There are 63 petroleum blocks gazetted in Kenya: 35 are open for bidding and 27 are licenced (26 to 13 international oil companies and 1 to NOCK).

RERAC, the Renewable Energy Resources Advisory Committee, is in charge of regulating the development of the renewable energy policy.

REREC is the lead agency for the development of renewables other than geothermal and large hydro.

GDC, Geothermal Development Company (100% state-owned) was created in 2008 to fast track the development of geothermal resources.

In its updated NDC (2020), the country set a GHG emissions reduction target of 32% in 2030 (30% previously), compared to a BaU scenario. To reach this target, Kenya commits to mobilize resources to meet 13% of the budget, estimated at US$62bn, and will require international support for 87% of the budget.