View all macro and energy indicators in the Japan energy report

The energy intensity to the GDP has been decreasing since 2010 at the rapid average pace of 3%/year. 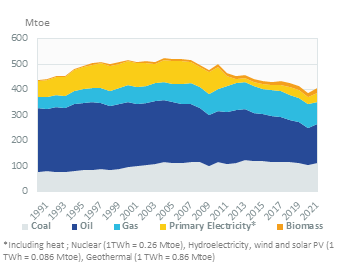 View the detailed fondamentals of the market at country level (graphs, tables, analysis) in the Japan energy report

Japan is the world's fifth largest oil importer. Crude oil imports have been decreasing since 2000 (-2%/year over 2010-2019 and -21% in 2020). Slower economic growth coupled with structural trends in the transport sector (shift to electric cars and reduced car use among young generations) and the gradual phaseout of oil-fired power plants are reducing the oil demand.

Supplies are diversified, but mainly come from the Middle East (around 90%). Japan's main suppliers are Saudi Arabia (around 40%) and the United Arab Emirates (25%).

Oil product consumption has been generally decreasing steadily since 1996, except between 2010 and 2012, with the oil demand from power plants increasing by 80% to compensate for the closure of nuclear plants. It declined by 3.8%/year between 2012 and 2020 to reach 148 Mt in 2020, as utilities progressively switched to coal. 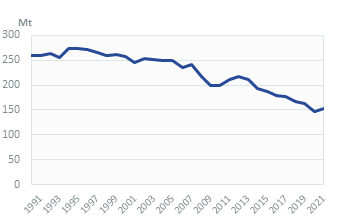 Two thirds of natural gas is used for power generation. 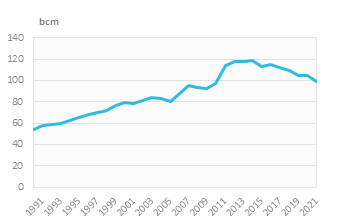 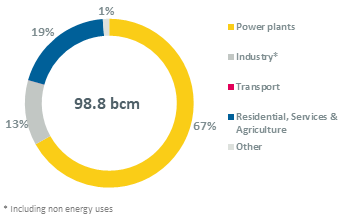 Electricity production uses 66% of the coal consumed, and the remainder is consumed by industry, mainly by the iron and steel industry. 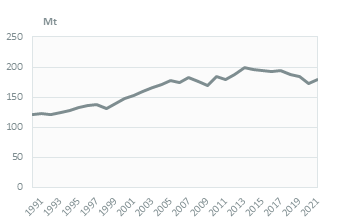 Electricity consumption has generally been decreasing since 2010, especially since 2016 (-1%/year on average). 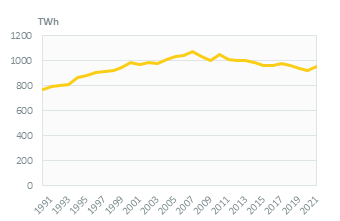 Industry accounts for 36% of electricity consumption, followed by services (33%) and households (27%). 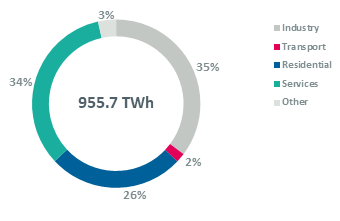 Feed-in tariffs (FiTs) were removed in February 2020 for large solar PV projects (>250 kW) and replaced by a tendering program initiated by the METI. They were introduced for solar PV in 2009 (for surplus electricity production only) and for other renewables in 2011.

The long-term goal, announced in 2019 in the long-term growth strategy under the Paris Agreement, is to become carbon neutral in 2050.