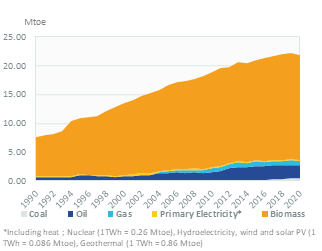 The country does not produce oil.

The 14 900 bbl/d Tanzania and Italian Petroleum Refinery (Tiper), located in Kigamboni (Dar es Salaam), was shut down in 1999.

In 2016, the Kamal Group started operations of a heavy oil refinery in Bagamoyo. The facility produces approximately 27 kt/year of oil and 10 kt/year of lubricant.

Under the framework of the 2010 SE4ALL AA, Tanzania intends to double the share of renewables in its energy mix by 2030. Tanzania was selected by the Scaling-Up Renewable Energy Programme (SREP), part of the Climate Investment Funds (CIF).

Since the COP 22, 48 countries, including Tanzania, target 100% domestic renewable energy production without a specific deadline. It bets on geothermal, solar, wind, and hydropower. The country also implemented a National Solar Programme under the framework of the World Solar Programme (WSP).

Tanzania submitted its first NDC (Nationally Determined Contribution) in 2018. It set a GHG emissions reduction target of 10-20% by 2030, compared to a business as usual scenario. The actual target will depend on international support in the form of finance, investment, technology development and transfer, and capacity building. The emissions reduction programme will also be reviewed once again after the first Biennal Update Report (BUR).