View all macro and energy indicators in the Belarus energy report

Per capita energy consumption stands at 2.8 toe (2018), including approximately 3 400 kWh of electricity. 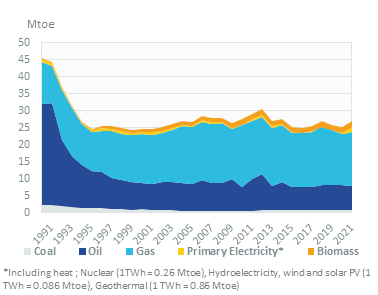 View the detailed fondamentals of the market at country level (graphs, tables, analysis) in the Belarus energy report

The refining capacity is higher than the domestic needs, making Belarus a net exporter of oil products (around 70% of total production since 2010).

There is no binding target for renewables. However, the government is aiming to reach a 9% share of renewables in the energy mix by 2035 (up from just under 6% in 2013). Electricity generation from renewables is expected to grow 10-fold to 2.6 TWh by 2035.

In its NDC (Nationally Determined Contribution), Belarus committed to reducing HGH emissions by at least 28% below the 1990 level by 2030, excluding emissions and removals in land use, land-use change and the forestry sector, and without any additional conditions.