View all macro and energy indicators in the India energy report

View the detailed fondamentals of the market at country level (graphs, tables, analysis) in the India energy report

Of the total consumption for 2021, 41% was used in transport, 32% in industry (including non-energy uses), and 21% in the residential, services, and agriculture sector. The remainder is consumed in power plants (1%) and in the hydrocarbon industry (5%).

Industry is the main consumer of gas with 48% in 2021 (mainly fertiliser plants). It is followed by electricity production (25%) and, to a much lesser extent, transport (5%) and the residential and services sector (7%).

India aims to promote the use of CNG vehicles to reduce pollution in cities; 3 628 CNG stations had been deployed as of December 2021.

In 2021, power generation and industry were the main consumers of coal and lignite, with 74% and 21%, respectively (3% only for households and services). 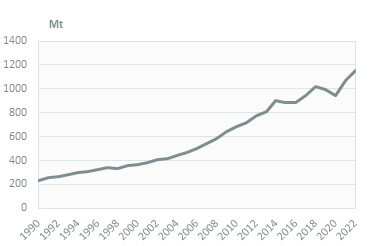 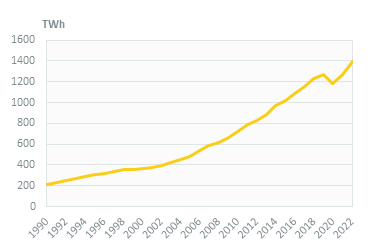 IREDA, the Indian Renewable Energy Development Agency, finances the development of renewables. SECI, Solar Energy Corporation of India, under MNRE, manages the implementation of the Jawaharlal Nehru National Solar Mission (JNNSM), which aims to deploy 100 GW of solar power over 2010-2022. Bymid-2022, only half of this target has been achieved.

In 2019, the government announced a 100% railway electrification target in 2030 as part of its strategy to reduce its CO2 emissions.