Since 2000, total energy consumption has increased at the significant rate of 6.3%/year, reaching 87 Mtoe in 2018. The consumption of coal and electricity has grown very quickly since 2000: by 14% and 13%/year, respectively.

The Ca Tam offshore oilfield (with reserves of 4.3 Mt), in southern Vietnam, came into operation at the beginning of 2019. The country started oil production in 1986 in the Bach Ho offshore field (White Tiger), production at which has been falling since 2001. A second important field, Dai Hung ("Big Bear"), started production in 1994.

As part of the New Energy Master Plan, the Government issued a resolution in February 2020 setting out more ambitious long-term goals for renewables than in the Renewable Energy Development Strategy of 2016. The share of renewables in total primary energy supply is expected to reach 15-20% by 2030 and 25-30% by 2045.

Vietnam NDC reaffirmed its GHG emissions reduction unconditional target of 8% by 2030 compared to a BAU scenario (BAU projected to be 787 MtCO2eq). The reduction target could increase to 25% if international support is provided. Vietnam will focus on transport, agriculture, and land use to reduce GHG emissions. 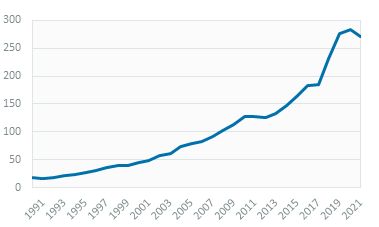