View all macro and energy indicators in the Qatar energy report

The country's total energy consumption per capita is very high at around 15 toe, including 15 100 kWh of electricity (5th highest level for electricity in the world). 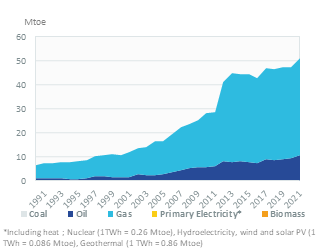 View the detailed fondamentals of the market at country level (graphs, tables, analysis) in the Qatar energy report 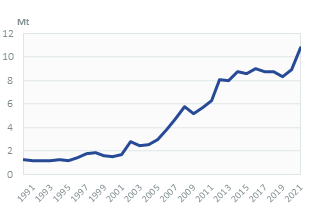 The oil and gas sector consumes 55% of the total, electricity production 24%, and industry 21% (including non-energy uses). 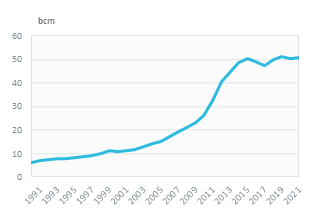 Electricity consumption ramped up very rapidly between 2000 and 2018 (10%/year on average) with the increasing use of air conditioning and the soaring water desalinisation industry. After a slight decline in 2019 (-3%), it reached around 44 TWh in 2020.

The residential sector accounts for 45% of that consumption and industry and services follow with 28% and 27%, respectively.

The country strives to meet 20% of its energy demand from renewable sources by 2030. It initially aimed to reach a solar capacity of 1 800 MW by 2020, for an estimated cost between US$10bn and US$20bn. However, this target will not be reached, as the commissioning of the full 800 MW power plant is scheduled to be connected to the grid in 2022.

In August 2021, Qatar unveiled its updated first NDC, in which the country pledged to reduce its GHG emissions in 2030 by 25% relative to the BaU scenario