View all macro and energy indicators in the Mozambique energy report 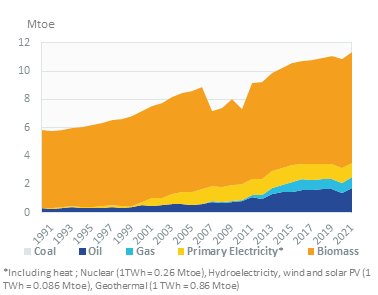 View the detailed fondamentals of the market at country level (graphs, tables, analysis) in the Mozambique energy report

Mozambique produces NGL in very limited quantity and has no refinery, therefore, all the oil products supplied are imported, totalling 1.6 Mt in 2020 (stable since 2016).

The National Directorate of New and Renewable Energy is in charge of framing policies to increase the use of renewables.

The Master Plan for Electrical Infrastructure ("Plano Diretor de Infraestruturas Elétricas 2018-2043") foresees a reduction in theshare of renewables in the total capacity by 2043, with hydro representing only around 9% of the new capacities to be installed between 2018 and 2028 and 40% between 2028 and 2047.

In its updated NDC (November 2021), Mozambique targeted a GHG emission reduction target of 10 MtCO2eq in 2025, i.e. around 20% below a BAU projection; the cumulated reduction between 2020 and 2025 is estimated at 40 Mt. The target is conditional on financial assistance and technology transfer.

In 2012, the Government adopted its 2013-2025 National Strategy for Mitigation and Adaptation to Climate Change (ENAMMC). It aims to reduce vulnerability to climate change and improve the population's living conditions.