View all macro and energy indicators in the Mauritania energy report

Oil covers 67% of the country's energy needs, biomass 31%, and primary electricity (hydroelectricity, wind, and solar) only 2%.

View the detailed fondamentals of the market at country level (graphs, tables, analysis) in the Mauritania energy report

Oil production, which started in 2006 at the Chinguetti oil field at a level of 1.5 Mt and halved in 2007, has almost disappeared since then (0.05 Mt in 2020). This situation was mainly due to technical difficulties (geological problems, maintenance, gas leaks, false alarms, closure of a well, rise in the level of water, etc.) and the geological structure of the field.

The country's only refinery stopped operating in 2000. 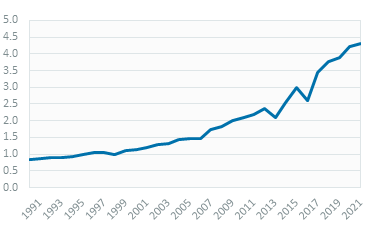