View all macro and energy indicators in the Kuwait energy report

Per capita consumption is very high, at 8.0 toe in 2018, with electricity accounting for around 13.7 MWh/capita. 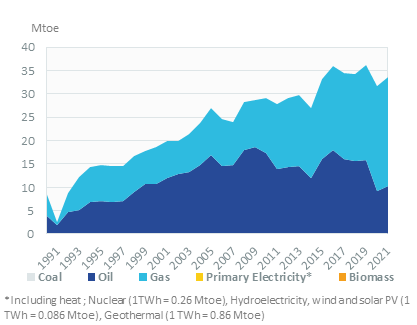 View the detailed fondamentals of the market at country level (graphs, tables, analysis) in the Kuwait energy report

Oil production increased by more than 50% between 2000 and 2012. After remaining roughly stable until 2016, it has decreased by 7% since then to148 Mt in 2018, partly because of a dispute with Saudi Arabia resulting in the stoppage of production at the Khafji and the Wafra fields in the divided neutral zone. In October 2019, Kuwait & Saudi Arabia agreed to restart oil production in those fields. In addition, production cuts decided by OPEC in 2017 have affected Kuwait's output as the country committed to reduce its production by around 131 kb/d until March 2018.

The country set an ambitious goal to generate 15% of its electricity from renewables by 2030, as part of the goals set in its New Vision 2035.

In April 2018, Kuwait ratified the Paris agreement, thus validating its Nationally Determined Contribution. The NDC implies a commitment to set up a transition to a low-carbon economy, without a quantitative target. 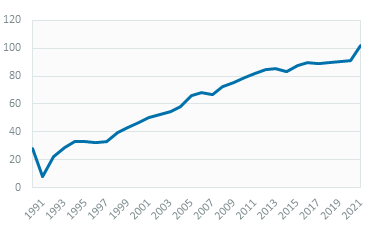