View all macro and energy indicators in the Cameroon energy report

Total energy consumption grew very rapidly between 2013 and 2016 (11%/year) to each 9.3 Mtoe and has remained stable since then. 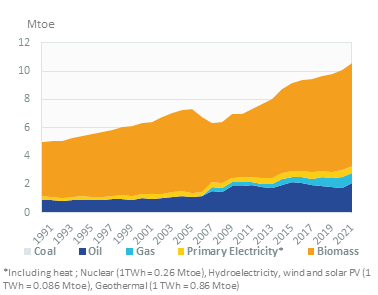 View the detailed fondamentals of the market at country level (graphs, tables, analysis) in the Cameroon energy report

Oil production decreased to 3.5 Mt in 2018, confirming a 23% fall in 2017. It had increased by 12%/year between 2011 and 2015 with the start of production of the Bojongo field and the growing production of the Inter-Inoua Barombi, Barombi Northeast and Padouk fields, operated by SNH. Oil production is still far below its 1984 peak level of 8.8 Mt.

Approximately 90% of oil is exported.

The Cameroonian portion of the pipeline which is used for the export of Chadian oil is 880 km long and has a capacity of 225 000 bbl/d.

The government would like to bring the share of renewables (large hydro excluded) to 25% of the electricity mix in 2030 (11% from small hydro, 7% from biomass, 6% from solar PV, and 1% from wind). Part of the increase in the electrification rate of households depends on the development of these decentralised energies.

Cameroon set an NDC commitment of a 32% reduction in GHG emissions by 2035 compared to a reference scenario.

CO2 emissions from energy combustion are stable since 2014 at around 5.9 MtCO2, after 8%/year growth between 2006 and 2014. Transport is responsible for half of these emissions (51%), followed by industry (25%) and the energy sector (14%). These emissions are in line with the other countries of the Sub-Saharan Africa region (outside South Africa): 0.2 tCO2/inhabitant in 2018.