View all macro and energy indicators in the Bangladesh energy report

The country's overall energy consumption is increasing quickly (4%/year since 2010), driven by rapid economic growth (6.7%/year). Its progression, however, is 40% lower than the GDP, resulting in a rapid decrease of its energy intensity (-2.7%/year). 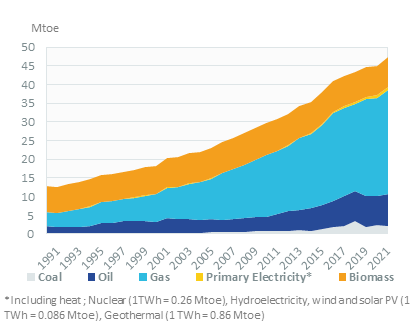 View the detailed fondamentals of the market at country level (graphs, tables, analysis) in the Bangladesh energy report

Most of the oil is imported, as national production only covers 7% of the country's needs. The imports mainly consist of oil products (close to 79%). Oil product imports have more than doubled since 2000.

In the PSMP 2016, the government set a target to reach 2.5 GW of renewable capacity in 2021, and 3.9 GW in 2041. It introduced incentive measures to mobilise the private sector. This target is in line with its NDC target to increase the share of renewables in total power generation to 10% in 2021.

In its National Determined Contributions (NDC), Bangladesh announced it aims to reduce GHG emissions by 40% (48 MtCO2eq) by 2030 compared to a BAU scenario, of which 15% (or 36 MtCO2) assumes international support.

CO2 emissions from energy combustion have risen steadily and have multiplied by almost 2.5 since 2005. 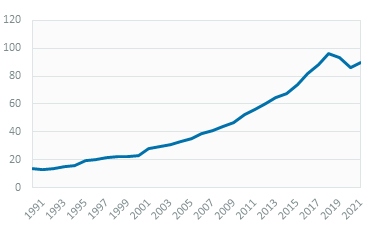