Enerdata, an independent Research and Consultancy Firm specialized in the global energy industry and carbon market since 1991, published its annual analysis of world energy demand.

The USA returned to a dynamic growth level, while the BRICS kept driving energy demand

Aside from the USA, European Union members are pursuing their energy consumption shrinkage (-0.6% in 2013). In this sluggish European context, Germany, the largest European energy consumer, showed a vigorous energy consumption growth in 2013 (+2.6%), while some major European countries, such as Romania (-10.9%), Spain (-6.2%) or Italy (-3.7%), recorded noticeable drops. As a result, the EU now accounts for no more than 12% of the global energy consumption, a 5 percentage point drop compared to the situation in 2000. Conversely, BRICS countries confirmed their increasingly dominant role in the new global energy landscape with a share close to 40% in 2013 compared to approximately 25% in 2000.

Figure 2 : Primary energy consumption evolution by countries between 2000 and 2013 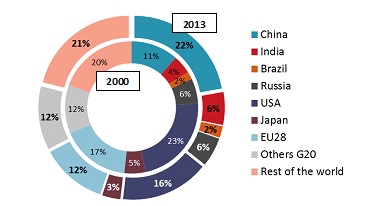 For the fourth year since 2008, coal was the main contributor to the world energy demand growth with a consumption rise of 102 Mtoe in 2013 (+1.9%), representing about 40% of the additional primary energy consumed. 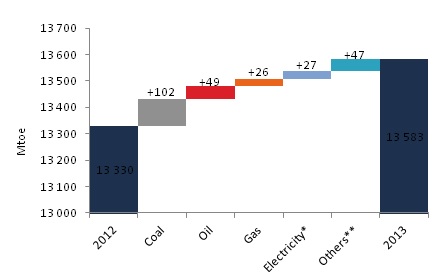 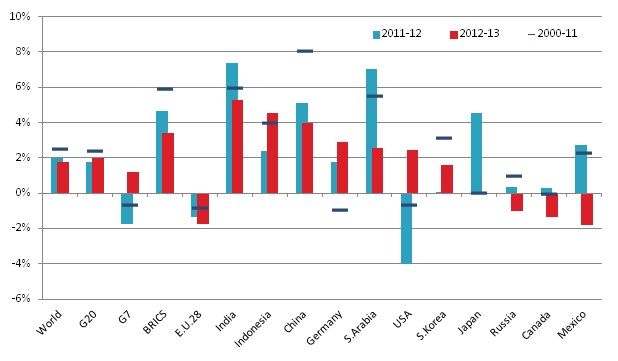 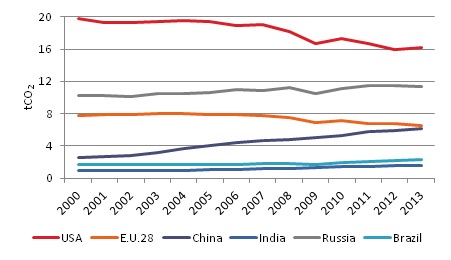 In 2013, oil preserved its dominating position at the world level in 2013 with a market share of 31% (3 Gt), down from 36% in 2000 (2.7 Gt). Oil consumption grew by +0.9% in 2013, slightly above its 2012 growth (+0.8%), mainly due to the return to a positive growth in the USA (+1.6%), that represents a quarter of the world’s oil consumption, after six years of contraction since 2006. Although the BRICS’s oil demand growth was high in 2013, it was cut in half (+2.6%) compared to 2012 (+4.9%), mainly due to the Chinese deceleration (from +6% to +3%). In spite of the slowdown of its growth in oil demand, the Chinese needs have kept increasing and they rely more and more on imports. Conversely, the USA has dramatically reduced its overseas dependence thanks to a surge in its indigenous oil production, driven by shale and tight oil production in Texas and North Dakota. As a result, China almost caught up to the USA in terms of oil volumes imported in 2013 and should surpass the USA in 2014. 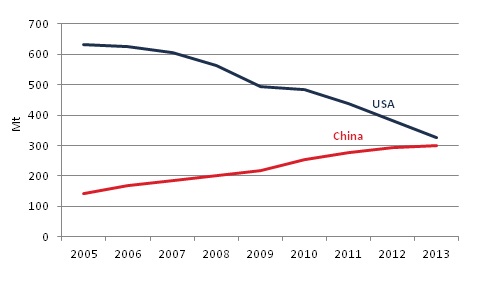 Coal consumption raised for the thirteenth year in a row

The world gas consumption progressed by a timid +0.9%, down from the dynamic growth recorded in 2012 (+2.9%) and over the past decade (+2.7%/year between 2000 and 2011). The 2013 slowdown is explained by the gas consumption deceleration in the USA (+2% in 2013 against +4.5% in 2012), which represents a fifth of the global demand, due to a significant gas price increase (+35% on average between 2012 and 2013). Meanwhile, the Russian and the European gas consumption (13% and 14% of the world demand, respectively) shrunk by -1.4% and -0.7% in 2013, respectively, for the second year in a row. In Russia the drop was mainly due to the rise in households’ prices; in Europe it is mainly explained by a warm winter as well as a low demand and the substitution of coal in power generation due to low international coal prices.

Source: Enerdata - from US DoE, EDMC and NBP

The constant development of renewable energy sources (including hydroelectricity and biomass) led them to dominate the European power mix for the first time in 2013: they accounted for 31% of the electricity generated in Europe3, exceeding the shares of coal (27%), nuclear (24%) and gas (17%). 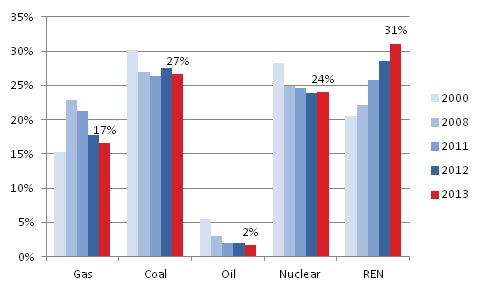 This triggered the mothballing or closure of an increasing number of gas-fired power plants that have become unprofitable due to insufficient utilisation (less than 3,000 hours on average in Germany in 2013). As a result, utilities face lower income due to low demand for thermal power generation. This situation deteriorates the return on investment of fossil fuels-based power assets that are required to meet the peak electricity demand. 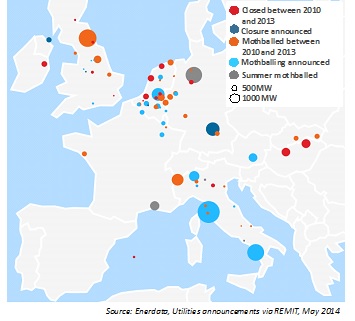 Although Europe stayed a major player in the development of renewable energy sources, one of the most important trends in 2013 was Asian solar photovoltaics increase: 7 GW of new installed capacity in China and 7 GW in Japan. The extension of regulatory incentives in Asian countries (China, Japan, and India) has largely contributed to this key development.

Figure 12 : PV new installed capacities in the world in 2013 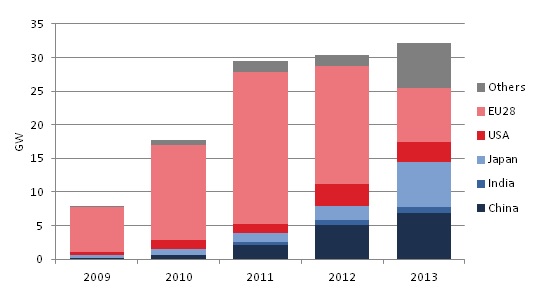 It is quite the opposite in the USA for the wind turbine market where uncertainty around the regulatory framework has temporarily stopped or postponed many projects. For the fourth consecutive year, China was the most dynamic country with more than 13 GW of new installed capacity. Europe remains the renewable energy leader with nearly 200 GW of installed capacities, of which 120 MW are wind and 80 GW are solar.

Figure 13 : Wind new installed capacities in the world in 2013 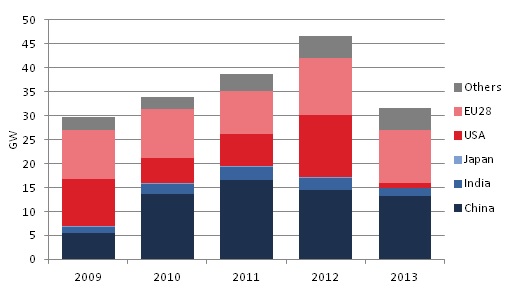