Consumption per capita is very high, reaching 6.6 toe in 2021, including about 9.2 MWh of electricity. 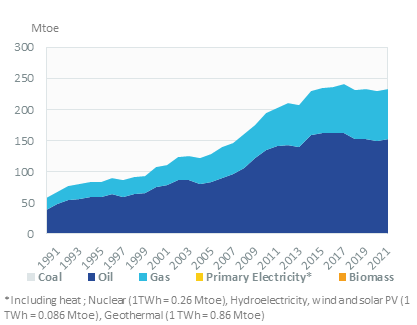 View the detailed fondamentals of the market at country level (graphs, tables, analysis) in the Saudi Arabia energy report

A Supreme Committee for Energy Mix Affairs, for Electricity Production and Enabling Renewable Energy was established in 2020, a to oversee renewable energy projects.

The Saudi Green initiative launched in 2021 set a target of 50% renewables in the power capacity mix in 2030.

In addition to the target of 50% renewable in the capacity production by 2030, Saudi Arabia wants to develop green hydrogen production, carbon capture, use and storage (CCUS), and to reduce global methane emissions in 2030 by 30% compared to 2020 levels.