View all macro and energy indicators in the Israel energy report

Since 2015, consumption has been quite stable at around 22 Mtoe.

The total energy consumption per unit of GDP is decreasing very rapidly (around -3.6%/year since 2010). 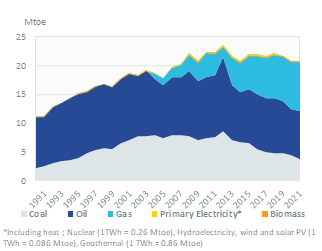 View the detailed fondamentals of the market at country level (graphs, tables, analysis) in the Israel energy report

In 2011, the Cabinet approved a plan to promote the production of electricity from renewables. The decision sets a target of 2 760 MW of renewables by the end of 2020, constituting 10% of the power mix. The goal was not achieved (1 773 MW reached in 2020, representing almost 9% of the power mix).

In its National Energy Efficiency Programme, the Government adopted a target of 30% of renewables in power generation in 2030 (intermediate target of 20% by 2025). In October 2020, it approved a plan to deploy around 15 GW of solar capacity to help meet these targets.

In July 2021, Israel unveiled a plan to cut greenhouse gas (GHG) emissions by 27% by 2030 and by at least 85% by 2050 compared to 2015 levels. The targets include a 96% reduction in GHG emissions from transport, an 85% reduction from the electricity sector, and a 92% reduction in the municipal waste sector.