Malaysian government seems to have step up its efforts to rationalise the energy subsidies. After the poor performance of Subsidy Rationalization Program (SRP) rolled out in 2010, fuel price increases in 2014 represents a renewed effort from the government to reduce the subsidy burden on the Malaysian economy. Gas prices revision for power sector in January 2014 followed by gas price revision for industry in May 2014 and again in November 2014 show the pressure on policymakers to remove the inefficient subsidies. In this executive brief, Enerdata analyses the natural gas supply and demand in Malaysia and gives its opinion on the subsidy situation in the Malaysian gas market. Declining domestic gas supply, expensive LNG imports and high gas demand is pushing the government to move away from subsidies. We also provide a brief introduction to our methodology for forecasting the end user gas prices. Enerdata forecasting methodology is used by industry to determine the effect of the subsidy rationalisation policies on their business model. Natural gas has a major role in the Malaysian energy sector. After the oil crisis in 1973 and 1979, Malaysian government adopted the Four Fuel Policy in 1981 that aimed to increase the fuel diversity by moving away from oil and including other sources like natural gas, coal and hydro. As shown in Figure 1, the share of gas in primary energy consumption of Malaysia increased from 1% in 1971 to around 40% in 2008. However, since 2009, Malaysia started facing gas shortages due to declining domestic gas supply (Figure 1) and high demand due to fast economic growth. This has resulted in an increase in share of coal and oil, from 18% and 28% in 2008 to 23% and 31% in 2013, respectively. The share of gas declined from 40% in 2008 to 31% in 2013.

In order to meet the growing gas demand, Malaysia, a traditional LNG exporter, turned to LNG imports. The Melaka FSRU came in operation in 2013 and two more regasification terminals are expected in the near future: Lumut FSRU expected to be commissioned in 2015 and an onshore regasification terminal at Pengerang expected in 2017. This will take the total regasification capacity from zero to around 8.5 MTPA in just a period of 5 years as shown in Figure 2. In 2013, Malaysia imported LNG from a number of sources with Brunei, Nigeria and Algeria as the major suppliers. The imported LNG price was oil indexed and followed the movement of Asia-Pacific regional LNG prices. 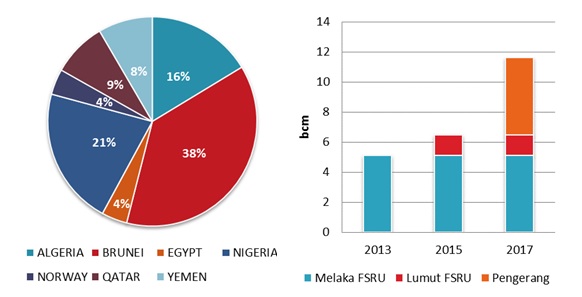 Lack of domestic gas supply, high gas demand and expensive LNG imports has brought the government’s attention to gas price subsidies. Gas price liberalization is a way to make LNG imports economically feasible, control the ‘inflated’ gas demand due to low prices and gain from the ‘premium’ consumers who are ready to pay higher gas prices. In 2010, Malaysian government rolled out a Subsidy Rationalization Program (SRP). The proposed price hikes in SRP for the natural gas subsidies are shown in Table 11. In addition to price hikes in the second semester 2010, SRP proposed an increase in gas price for power and industry by MYR 3/MMBtu every six months from 2010 to 2014. However, the actual implementation was far from the proposed hikes. As of November 2014, the gas price for electricity generation is MYR 15.2/MMBtu2 and for industry it is MYR 19.8/MMBtu3. The prevailing domestic gas price for power and industry are very low as compared to the market price: the average Malaysian LNG export price in 2013 was around MYR 44/MMBtu and the price of imported LNG in Malaysia was around MYR 35-44/MMBtu.

The huge difference between the market price of gas and domestic gas prices indicates the unsustainability of the gas price subsidy regime. Without progressive gas price liberalization, it will be difficult for Malaysia to reduce the fiscal deficit. Total fuel subsidies in Malaysia in 2013 were around MYR 28bn which is around 2.8% of GDP in 2013. Malaysia fiscal deficit was around 4% of the GDP in 2013 and government aims to reduce this to 3% by 2015 in the Economic Transformation Program (ETP). The way forward is to reduce the operating expenditures by reducing subsidies in a phased manner. Enerdata forecasting methodology for natural gas prices (power and final sector). After the start of the Melaka FSRU terminal in 2013 to supply the increasing demand of natural gas, the price levels of the domestic gas and the imported LNG are expected to converge in the scenario of progressive subsidy rationalization. Enerdata has developed its in-house POLES model to simulate the global as well as country level energy markets covering different fuel types like oil, gas, coal, renewables and nuclear. For a regulated market like Malaysia, we employ equation 1 to forecast the fuel prices till the market is fully liberalized4.

We assume that, for a regulated market which is in the process of moving away from subsidies, the motivation (or pressure) to change the price level of the natural gas follows the changes in import price, energy taxes and carbon taxes. Import price forecasts are produced using the dynamics of the global gas/LNG markets and then used to produce economy wide scenarios to study the effect of subsidy removal on different business models. [Subscription is required for more details] This executive brief is produced as part of our research in Gas/LNG and Power sector. If you are interested to know more about our Gas/LNG and Power Services, please contact us at asia@enerdata.net Notes: 1 SRP addressed energy and food subsidies. In this executive brief, we restrict our discussion to natural gas subsidies only. 2 Source: Suruhanjaya Berhad – Energy Commission http://www.st.gov.my/ 3 Source: Gas Malaysia Berhad http://www.gasmalaysia.com/ and Malaysia Energy Information Hub http://meih.st.gov.my/home 4 After full liberalization of the market, we use econometric and supply demand equilibrium techniques to forecast the short term and long term prices. Please contact us for more details on the methodology. For a sample case study, please refer to Enerdata Forecast Model for Electricity Price in Japan here.