In this article, Enerdata comments on the ongoing developments in the Singapore LNG market. We describe and provide perspectives on the challenges that Singapore faces to develop a competitive and secure domestic natural gas market and participate in the international LNG market to develop a trading hub. Natural gas plays a dominant role in the energy industry of Singapore. As of August 2014, Singapore has 12.8 GW of operational power capacity, of which almost 80% (10 GW) of natural gas. CCGTs (400 MW) also account for around 83% of the capacity under construction, the rest is coming from a coal/biomass power plant project (80 MW). Undoubtedly, for an economy whose more than 90% electricity comes from natural gas, diversification of the supply source is of great importance. Figure 1 shows the natural gas imports in Singapore. Pipeline gas from Indonesia and Malaysia was the only source of gas until 2012. This prompted the Singapore government to diversify the sources of natural gas by importing LNG since 2013. 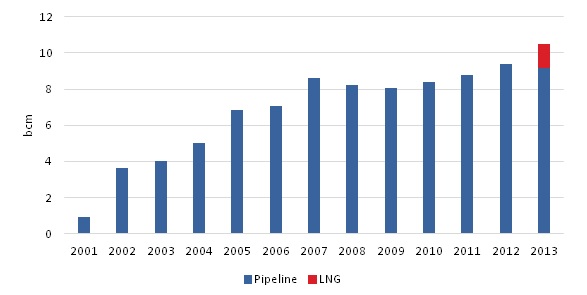 In May 2013, Singapore commenced the operations of its LNG terminal (SLNG) with an initial capacity of 3.5 Mt/year which was increased to 6 Mt at the end of 2013. BG Group has an exclusive franchise to import LNG in Singapore. This will end once BG Group is able to sign sales agreements of a combined capacity of 3 Mt or by 2023, whichever is earlier. By June 2014, BG Group has concluded the sales of 90% of its exclusive franchise. The LNG demand of Singapore is expected to increase by 1-2 Mt/year by 2020 and hence, the Energy Market Authority (EMA) aims to appoint more importers to supply LNG to the city state. On 30 June 2014, EMA launched the stage one of the ‘Request for Proposals’ (RFP) for two additional LNG importers beyond the 3 Mt/year contract with BG. The RFP has marked the beginning of the next wave of changes that Singapore aims to bring to the domestic as well as regional market. This will bring Singapore a bit closer to its aim of establishing a trading hub in Singapore as the proposal process encourages the bidders to outline their strategy for participating in the trading activities like re-load and re-sale of LNG. Pavilion Gas bought an Indonesian cargo in July 2014 and stored it at the SLNG terminal. The cargo is not for domestic consumption and will be re-sold in the international market. This is the first reload deal for Singapore. Spot trading activity in the LNG industry has seen growing rapidly over the past decade. The proportion of spot trade and short term deals reached 30% of the total global LNG trade in 2013 as compared to just 5% in 2000. However, there are a number of aspects that Singapore needs to align together to achieve the aim of a secure and competitive domestic market and establishing itself as an LNG trading hub in Asia. It will be challenging for EMA to have both supply security and providing a push to spot trading activity at the SLNG terminal. For spot trading volumes, buyers are restricted to 10% of their long term gas import volumes. Additionally, all the spot cargoes bought on the terminal for domestic use need a prior approval from EMA. This might deter the end users to participate in the spot market. Another aspect that needs more clarity is the interaction between secondary gas market and the spot trading activity at the terminal. Secondary market will provide an option to the buyers to procure gas from each other using the domestic network. The interplay between the trading activity on the domestic pipeline network and that on the SLNG terminal will be crucial for the evolution of a competitive market. For example, if the price on the secondary market is higher than that of the spot LNG market, then buyers will be discouraged to go for trading on the secondary market. If there is an infrastructure bottleneck on the LNG terminal, then it will restrict access to buyers for spot trading. Congestion in one market will have ‘spill over effects’ on the other market. Import control on pipeline volumes will either be also lifted by 2018 or as soon as BG completes 3 Mt/year of term deals. Additionally, restrictions on selling pipeline gas will be removed. For a small market like Singapore, allowing many sources of gas will create more complexities. Singapore needs to carefully coordinate these factors to have an efficient price discovery process and balance between security of supply and price competitiveness. If you are interested in Enerdata Gas and Power Services, please contact us at asia@enerdata.net.