In February 2015, Arun regasification terminal in Indonesia received the first cargo from the BP operated Tangguh LNG terminal. This marked a new era in the domestic gas market in Indonesia, a country that used to be a major LNG exporter but is now turning towards natural gas imports to meet its growing domestic demand.

In this executive brief, Enerdata analyses the demand for natural gas in Indonesia and presents Enerdata Risk Assessment Methodology to identify and mitigate the project potential risks in the natural gas / LNG and power sector.

Figure 1 shows the natural gas consumption in Indonesia from 2000 to 2013 and the share of LNG exports in terms of the total natural gas production. In 2002, the Indonesian government introduced a Domestic Market Obligation (DMO) clause in the Production Sharing Contracts (PSCs) which stated that a minimum of 25% of the gas production will be supplied to the domestic market. However, keeping only 25% of the production volumes for the domestic market failed to match the rise in demand. As shown in Figure 1, 2007 saw a 14% decrease in consumption relative to 2006 due to supply shortages. Inability of the DMO to match the local demand prompted the government to use part of the export volumes for the domestic market. This helped in supporting the consumption growth and the total consumption grew from 30.5 bcm in 2007 to over 44 bcm in 2013 – an increase of 50%.

As a result there has been, as shown on Figure 1, a dramatic drop in the share of LNG exports in total production, from 56% in 2000 to 23% in 2013. This is because the production was insufficient to keep the LNG exports volumes at historical levels while meeting domestic demand at the same time.

A deeper investigation in the historical gas demand reveals that the power generation and industrial sectors are the two main drivers of the gas demand. From 2000 to 2013, the gas consumption in power sector increased by 90% and the consumption in industrial sector saw a growth of more than 150%. Chemical, ceramics and textile industry are among the main users of natural gas in Indonesia.

Indonesia should become a net gas importer by 2025

Figure 2 shows the forecast for Indonesia natural gas demand using Enerdata Global Energy Market Model – POLES. The Indonesia GDP is expected to grow strongly by over 5% until 2020 after which the growth rate will flatten out to levels of 3-4% by 2040. The domestic oil production will fall down significantly and oil will be replaced by other energy sources like natural gas, electricity and coal. POLES projections show that total gas consumption would reach 126 bcm by 2040 which represents an average progression of 4%/year on average from 2013 to 2040. The rapid growth in demand will make gas imports necessary for the country. We expect that Indonesia will become a net gas importer by 2025.

The gas consumption in power sector will increase by 127% from 2013 to 2040. As of March 2015, around 1 800 MW of gas power projects are under construction or approved and further 8 500 MW are planned (source Enerdata Power Plant Tracker database). Around 60% of the operational gas power generation capacity belongs to PT PLN which is planning to build 2 800 MW of gas fired power plants in the outer Java regions (Kalimantan, Sulawesi and Nusa Tenggara). These plants are planned mainly for peaking power requirements. Enerdata also forecasts that the utilization factor of gas power plants will see an increase from the current average of 3 500-3 700 hours to 5 200 hours per year by 2040.

The gas consumption in the industry sector will grow by 173% over the 2013-2040 period. The industry sector might see threat of supply shortage in future if the domestic gas supply does not see a boost either from production or LNG imports. In the case of a supply shortage, the government defines that gas supply should first be used for oil lifting followed by fertilizer feedstock, power generation and other industry. Hence, industrial sector is more exposed to the gas supply side shocks. Supply shortage might bring back the memories of 2009 when the gas transmission and distribution company PGN reported that it will not be able to meet the extra demand from industry sector which posed risks of lower industrial output. 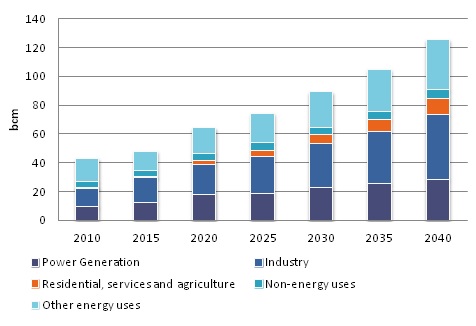 The Indonesian domestic market is in the fast development phase. Numerous factors such as subsidies, pricing policy, gas import policy, growth of supporting infrastructure to connect the production and demand centers, domestic supply policy, unconventional gas etc… will play a key role in identifying the investment opportunities and implementing profitable projects in the natural gas sector.

Enerdata is working closely with governments, financial institutions and industry players helping them to identify the risks associated with the investments or future operations of the current projects and assets providing mitigation plans. Figure 3 show a high level overview of the Enerdata Risk Index.

Energy markets are exposed to a myriad of risks, with the primary drivers of these risks being market structures, indigenous resources and economic health. Enerdata grouped the risks into five broad risk categories: 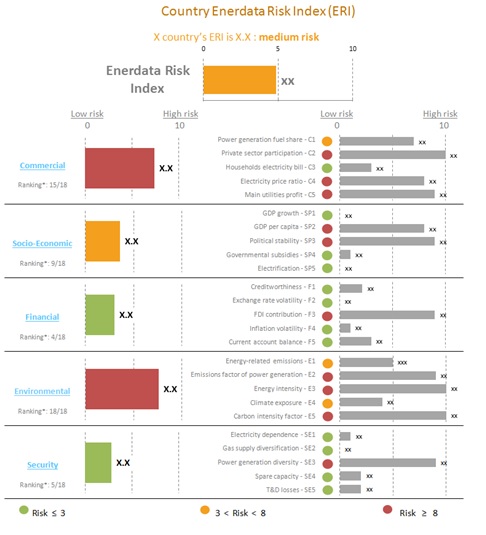 This executive brief is produced as part of our Gas/LNG and Power Consulting Services. If you are interested in our services, please contact us at asia@enerdata.net