Implications of the gas price increase in India

On 18 October 2014, the Government of India approved the revision of domestic gas price. The new price is a volume weighted average of Henry Hub, NBP, Alberta hub and Russia gas price . Under the new price scheme, domestic gas price will be $5.61/MMBtu from 1 November 2014 to 31 March 2015. This represents an increase of 50% from US$3.8/MMBtu (Gross Calorific Value) and will be revised every six months. In this executive brief, Enerdata analyses the domestic gas market situation in India and provides its opinion on the possible implications of the gas price increase. The increase in gas price has come as a huge relief to the upstream players like ONGC and Oil India. Government estimates that 80% of the additional revenue will go to government owned companies. Natural gas was losing its market share in India due to expensive LNG imports and lack of domestic supply. The discovery of Krishna Godavari field (KG-D6) by Reliance in 2002 had increased the hope of transforming the natural gas industry in India. However, production started falling after reaching a peak of 57 mmscm/d in 2010. The expected peak production was 80 mmscm/d. 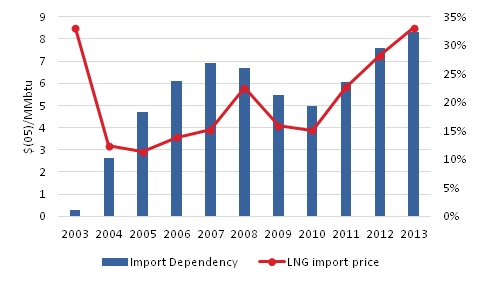 The announced price reforms are not applicable to the KG-D6 field. Reliance claims that technical problems led to a fall in production from KG-D6. The arbitration related to the aspect of shortfall in production is still unsettled. Reliance will be paid $4.2/MMbtu until the legal outcome of the legal proceedings. At its peak production in 2010, KG-D6 accounted for 40% of total domestic gas production in 2010. Figure 1 shows the dependency of India’s natural gas market on LNG imports. Import dependency, which is measured by the ratio of imported volumes and total consumption, increased from 1% in 2003 to 26% in 2007. It decreased in 2008 due to lower gas consumption as a result of the economic recession. Natural gas production soared in 2009 and 2010 due to contribution from KG-D6 basin and led to a fall in import dependency. However, since 2011, the import dependency is rising constantly due to lower than expected production from the KG-D6 basin. At the same time, the average price of LNG imports in India increased from around $4/MMBtu in 2010 to $8.5/MMBtu in 2013 undermining the competitiveness of natural gas against other fuels like coal.   Problems in domestic production coupled with increase in prices have weighed down on the gas consumption in India, which decreased by 30% from 2010 to 2013 whereas the coal consumption has increased by 10% in the same period (Figure 2). The share of natural gas in the total primary energy consumption decreased from 7% in 2010 to 5% in 2013. 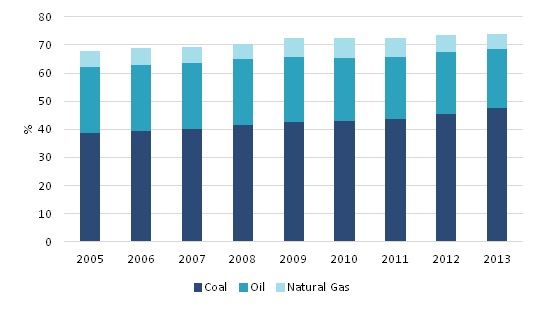 Natural Gas R/P ratio fell from 33.5% to 22% from 2008 to 2010 due to increased production but then rose again to 42% in 2013 without any major discoveries. The revision in gas price policy will certainly give a boost to exploration and production activities. Fuel price reforms are expected to bring in more investments in the gas sector. However, the gas price policy still does not consider the domestic supply and demand fundamentals in India. The earlier gas price revision proposed in 2013 also made similar compromises on economic reasoning. Linking domestic gas prices to other markets in U.S, Mexico, Canada, European Union, FSU and Russia as shown in equation 1 is very unlikely be a long-term solution. Deregulated gas prices should reflect the domestic supply and demand situation.

Equation 1: Proposed domestic gas price in India to be effective from 1 November 2014

Furthermore, the price elasticity of gas demand is high in India which makes it difficult to raise end user gas prices without facing political and social pressures. Faced with gas shortages, government made power and fertilizer as the priority sectors for the allocation of gas produced. Power plants consumed around 28% of the total gas in 2013 whereas the fertilizer sector consumed around 31% of the total gas in India. Of the total gas volumes consumed in power and fertilizer, imported LNG accounted for around 19% share in 2013. The total installed gas based power capacity in India is 23.8 GW with 15.9 GW planned and 10.6 GW under construction at the end of 2013. Gas-fired power generation decreased by 12.5% from 2012 to 2013. Fuel price accounts for the majority share of the levelized cost of electricity generation (LCOE). We estimate that a 50% increase in gas price can have a 24-26% increase in the LCOE which can defer the investment decisions in gas power plants if appropriate incentives are not in place. If passed to end users, an increase of 25% in LCOE of gas power plants results in increase of around US$1.4c/kWh. Comparing this to 2012 electricity prices, this represents a significant increase: the average electricity prices were US$9.7c/KWh for industry and US$4.5c/KWh for households. Hence, it will be difficult for government to allow an immediate cost pass through to electricity end users. Natural gas accounts for 65%-70% of the fertilizer total cost of production in India. One ton (t) of fertilizer production can consume around 900 cubic meters (cm) of natural gas. An increase of US$2/MMbtu in gas prices will increase the cost of production by around US$64/t of fertilizer. Urea based fertilizer in India are sold at a maximum retail price (MRP) of US$90/t1 and government subsidizes the difference between MRP and actual cost of production. Under the new price regime, there is no clear guideline on the end-user price mechanism. One potential outcome would be that the government will not pass all the price increase to the end-users immediately and Enerdata estimates that potential additional annual subsidies will be around US$2bn which is around 0.013% of India’s GDP in 2013. The subsidies will be used to maintain the power and fertilizer industries competitive and then in the long term the additional costs will be passed to the end-users. In summary, Enerdata expects that the indigenous gas price increase will attract additional investors in the energy upstream sector and at the same time the Indian government should be able to absorb the additional end-users costs by providing temporary subsidizes. This executive brief is produced as part of our research in Gas/LNG and Power sector. If you are interested to know more about our Gas/LNG and Power Services, please contact us at asia@enerdata.net Notes: 1Department of Fertilizers, Ministry of Chemicals and Fertilizers, Govt. of India. http://fert.nic.in/page/fertilizer-policy