In this article, Enerdata reviews the ongoing developments in the China Nuclear market. We describe and provide perspectives on the challenges that China faces to develop a domestic nuclear market and to become a global Nuclear power technology exporter. Last month China's State Nuclear Power Technology Corp (SNPTC) announced a further delay to the operational start of the country’s first advanced nuclear project based on designs by US-based Westinghouse. Originally scheduled to be operational last year, the plant at Sanmen in the eastern Zhejiang province will not now be operational until at least the end of 2015. This latest delay, attributed by SNTPC to tougher safety checks in the post-Fukushima nuclear era, is an indication of the challenges faced by China as it tries to develop the supply chains and the personnel required to construct and operate dozens of new reactors. Currently China has 20 nuclear reactors at 7 separate sites with another 29 reactors at 30 sites under construction (Figure 1).

Figure 1: China Nuclear Plants in operation, under construction and planned 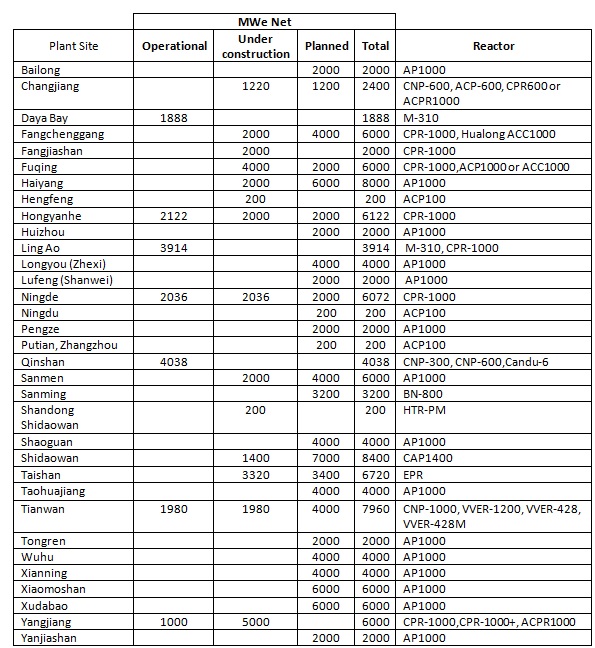 And, with additional reactors planned, China is targeting 58 GW of nuclear capacity by 2020, which will increase the share of nuclear in the generation mix from 2% to 6% (Figure 2 and 3). But this rapid nuclear expansion, which is largely driven by concerns over the country’s poor air quality, carries the risk of a shortfall in uranium, equipment, qualified plant workers, and safety inspectors. And China is actively addressing all these risks to ensure it can be self-sufficient in developing its nuclear portfolio. In 2007 China signed a deal with Westinghouse to construct the world's first advanced pressurized water (AP1000) reactors at sites on the eastern coast, which it sees as the mainstream nuclear technology to replace the CPR-1000 reactor, a Chinese development of the Areva 900 MW nuclear design that it imported in the 1990s, although intellectual property rights are retained by Areva. With most of the CPR-1000 components now built in China the country is well positioned to be a reactor exporter in the next decade. China has also adopted a proactive approach to fuel security. Last month China Uranium Corp Ltd, a wholly owned subsidiary of the State-owned China National Nuclear Corp, completed the purchase of 25% of Paladin Energy’s Langer Heinrich uranium mine in Namibia, one of Africa''s biggest uranium mines, for $190m. (Source: Enerdata Key Energy News) 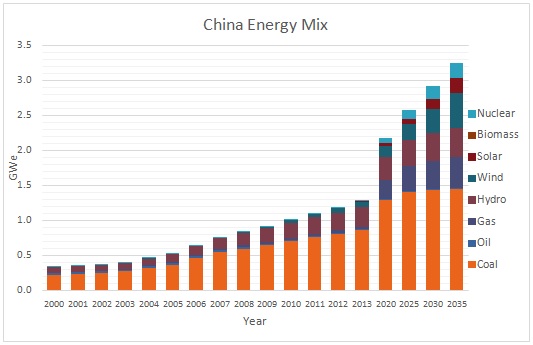 While China is making good progress with nuclear technology and fuel supply security, it lacks the necessary expertise in nuclear supply chain management, which is why state-owned China Development Bank Corporation’s (CDB) investment in EDF’s development of Hinkley Point C in the UK is potentially China’s most important nuclear investment this year. The nuclear deal, agreed in June with the UK government, potentially provides China with an opportunity to internationalize its supply chain management capability with Beijing and London agreeing on a framework to collaborate on supply chain development. While the China deal looks good for Britain, it provides more financial certainty for EDF in removing a potential investment hurdle to develop Hinkley Point C and enables the government to meet its commitment that new nuclear will be developed without state-aid: the major beneficiary of this agreement is Beijing. Not only will CDB be guaranteed a good return on its investment courtesy of the proposed contract for difference strike price, although this has yet to be approved by the European Commission, more importantly China will significantly benefit from Britain’s supply chain management expertise that Beijing will use to enhance its domestic nuclear management capability. Although China has downplayed the latest delays with the AP1000 reactors as “trivial” when compared to the lengthy delays and cost over-runs at new reactor developments in Olkiluoto, Finland and Flamanville, France, this reaction is more a public relations exercise to assure observers that it has the expertise to develop and operate its new nuclear capacity. But if China is considered to be dependent on outside nuclear expertise its aspiration to be a major player in the global nuclear market will be challenged, which is why the UK agreement is so vitally important to China’s nuclear aspirations. If you are interested to know more about Enerdata Power & Nuclear Services, please contact us at asia@enerdata.net