The National Development and Reforms Commission of China (NDRC) has implemented another round of price reforms. Effective from 1 September 2014, the price reforms will be applied on the existing volumes of natural gas and aim to bring the price of different sources of natural gas at the same level. The hike of RMB 0.4/cm (US$0.06/cm) will be beneficial for companies in the upstream business but it can also affect the gas demand that is sensitive to the price differential between gas and fuels like petrol and diesel. The use of natural gas in transport is sensitive to the fuel price differentials. An increase in natural gas price will reduce the economic appeal of using LNG in transports. In this article, we will highlight the important factors that affect the economics of LNG in transport focusing on LNG vehicles vs diesel and give our opinion on the effects of gas price increase on the future of NGVs. Natural gas can be used to power the transport sector in the form of compressed natural gas (CNG) and Liquefied natural gas (LNG). LNG has higher energy content per unit volume than CNG and hence is more suitable for heavy duty vehicles like trucks and buses. The use of natural gas in transport gained popularity in China due to price difference between natural gas and diesel, and also due to government support in the form of subsidies to the local industry. Natural gas emits 20% less CO2 as compared to diesel. Figure 1 shows the level of CO2 emissions from different fuels in the transport sector in China. The CO2 emissions from petrol and diesel have increased by 150 and 260% from 2000 to2013. Using natural gas to fuel the vehicles can bring down the high level of CO2 emissions from transport sector. 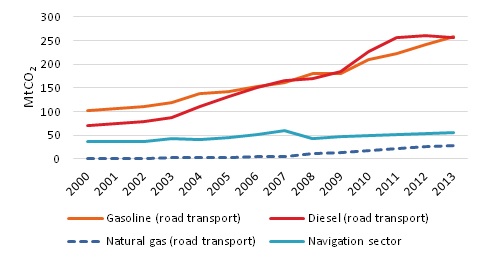 In 2013, China had around 1.2 million NGVs running on its road and supplied by around 3,000 compressed natural gas (CNG) stations and 600 LNG refuelling stations. Figure 2 shows the demand of petrol, diesel and natural gas in transport in China. The demand of natural gas increased by a staggering figure of 600 % between 2006 and 2013. For diesel and petrol, the corresponding figure is only 60-70 %. As a result, the market share of natural gas in road transport consumption has increased from 1.5% in 2005 to 6.5% in 2013. China consumes a substantial amount of diesel in domestic navigation sector also. The demand for diesel for navigation is steadily increasing since mid-2000s and in 2013, it was 60% higher than 2006. Natural gas, in liquefied form, has potential to replace diesel in navigation sector. The ‘Yangtze Gasification Project’ is getting a lot of attention from industry and is expected to be a future driver of natural gas demand in China. Majors like CNOOC, Sinopec and PetroChina are setting their plans to dominate the bunkering and associated liquefaction facilities market in China. 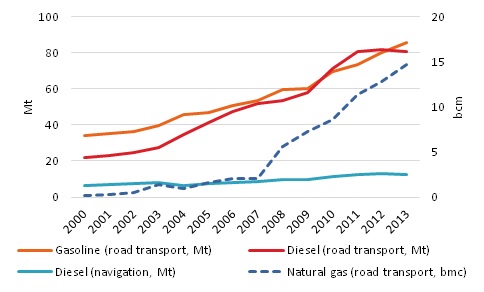 The price reform implemented by NDRC in September 2014 has made it necessary to revisit the economics of using LNG in road transport. LNG has around two times more energy per unit volume as compare to CNG. Due to this fact, the use of LNG in heavy vehicles is rising at a fast pace. In 2011, there were around 15,000 LNG vehicles in China and it is expected to reach 150,000 in 2015. One of the driving forces behind the increase in natural gas use is the price difference between LNG and diesel. However, to understand the full picture, one needs to take in account other factors also. LNG vehicles have higher upfront costs as compared to diesel vehicles. In 2013, a LNG truck was around 30-40% more expensive than a diesel powered truck. Additionally, the energy content of the two fuels is not same. LNG has lower energy content per unit volume as compared to diesel. As shown in table 1, the energy content of LNG is 38-42% lower than that of diesel.

To assess the effect of a price hike on LNG for vehicle users, we compare the fuel cost per km for an LNG powered truck vs a diesel powered truck. In 2013, the LNG price for vehicles was around RMB 4.5/cm (US$0.73/cm) on average whereas the diesel price was RMB 7.6/l (US$1.23/l). Due to lower energy content of LNG, a LNG vehicle has lower fuel economy (km per litre) then a diesel vehicle. Using the fuel consumption per km and cost per unit of fuel, we derive the fuel cost per km for LNG and diesel vehicle as shown in Table 2. The lower cost of LNG has to compensate for the higher upfront cost of LNG vehicles as well as lower energy content of LNG as compared to diesel. Using 2013 average values for all factors, we see that a LNG vehicle is 1RMB/km (US$0.16/km) cheaper to operate than a diesel vehicle. Taking into account the higher upfront costs of an LNG vehicle, the payback period will depend on the average distance travelled per year. Higher value of vehicle mileage (km per year) will compensate for the higher upfront costs of the LNG vehicle.

Table 2: Fuel cost per km for LNG and Diesel vehicle

To estimate the effect of increase in gas price, we do a sensitivity analysis of the input cost of LNG by keeping the cost of diesel at the same level. Figure 3 shows the effect on the fuel cost per km if the gas price increase is passed to LNG vehicle users. The fuel cost differential per km is reduced to 28% from 31% if half the price increase (RMB 0.4/cm or US$0.06/cm) is passed to the end user. If the entire fuel cost rise is passed, the difference in fuel cost per km is reduced to 25%. The decrease in fuel cost differential per km will increase the payback time of the end user. This reduces the economic case to switch to LNG based vehicle. However, a factor that will benefit the economics of LNG vehicle is the decision made in 2013 by the State council of China to desulfurise the diesel to a maximum level of 10 ppm sulfur by the end of 2017. This decision will increase the price of diesel vehicle and hence will be beneficial for the proponents of natural gas in transport.

Figure 3: Effect of increase in gas price on fuel cost per km

Overall, Enerdata thinks that using LNG for transport will continue to make economic sense even after price increase in September 2014. There will be effect of payback time for a LNG vehicle owner but with the increasing awareness against pollution, we also foresee more government support in the form of subsidies and stricter environmental regulations to help the growth of natural gas in transport in China. In our up-coming article, we will focus on the economics of LNG bunkering solutions in China with special attention to ‘Yangtze Gasification Project’. This article is produced as part of our research in Gas/LNG and Power sector. If you are interested to know more about our Gas/LNG and Power Services, please contact us at asia@enerdata.net