20 Nov 2018
In terms of geopolitics and costs, will materials become “The New Fossil Fuels”?

This month, we wanted to share the preliminary results of some ongoing research into the transition to carbon neutrality, or zero net emissions, and its impact on material resources in advanced economies. This research is led by Patrick Criqui, senior researcher emeritus at CNRS and Université Grenoble Alpes, and a member of Enerdata’s expert panel. In light of the IPCC’s recent report, the topic couldn’t be more timely.

We know one, obvious effect the energy transition will have: reducing economic and geostrategic dependence on fossil fuels. But that isn’t the only outcome to prepare for. Dependence will also increase on certain critical materials, including lithium, cobalt, rare earth elements, manganese, nickel, and copper. Increased demand for structural materials, such as cement, steel, and glass will also have to be considered.

The global quantitative impacts of a zero-net-emissions future will be more connected to changes in developing countries and international policies around the world, than to domestic policies in any one advanced economy.

Reduced demand for fossil fuels will likely lead to a drop in their international prices (when ignoring possible cyclical changes and strategic moves by producers – which are unlikely to have long-lasting effects – and any major geopolitical changes).

The root of the materials challenge, then, is mitigating dependence for critical materials on several not-necessarily-stable regions, for example: Chile for its lithium, the Democratic Republic of the Congo for its cobalt, and China for its rare earths. Some observers have gone so far as to ask if we are heading for a war over material resources1.

In assessing these risks, one must consider three distinct factors, each an independent possibility in its own right:

Some natural resource economists, such as Jeffrey Krautkramer3, suggest taking all of these potential developments into account leads to a paradox: while renewable natural resources are threatened with exhaustion from overexploitation, at least non-renewable resources are protected by the economic mechanisms of price and markets. This may hold true at least until 2050, while beyond that point, demand stabilization may become essential.

Figure 1: Renewables in Total Energy Consumption for OECD Countries Could Reach Between 24 and 42% — Depending on the Strength of RES Policies 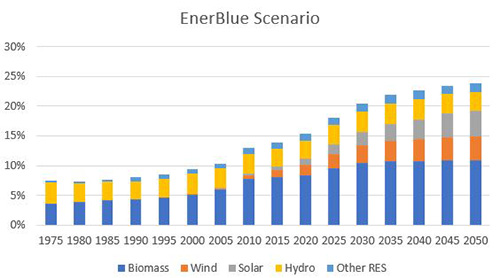 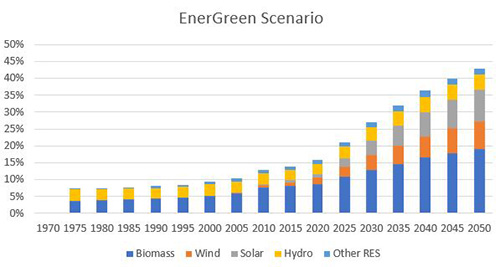 EnerGreen scenario definition:
The EnerGreen scenario, also part of Enerdata’s EnerFuture modelling exercise, envisions a world in which stronger environmental efforts are undertaken, leading to a carbon emission trajectory compatible with a 2°C temperature increase by 2100.

Impacts on Energy and Material Resources

The expected drop in fossil fuel prices (although difficult to predict, as it would result from the timing and intensity of decarbonisation policies at world level) combined with the reduction in fossil fuel use and imports (tending always closer to zero in transitioning countries), should lead to a massive reduction in many countries’ foreign energy spending and dependence.

Figure 2: In the EnerGreen Scenario, Energy Dependency – the Percentage of Energy Imported – Could Decrease, But Regional Variance Remains Significant

But will those reductions be effectively cancelled out by increases in spending, importation, and dependence for strategic materials?
The answer will depend on two factors:

Impacts on Policies and Short-Term Decisions

In the transition from fossil fuels to low-carbon technologies, the strategic priorities are circular economy and recycling of material resources – neither of which had any role in the fossil-fuel-based energy economy.

Therefore, research, development and innovation policies for low-carbon technologies are tasked first with developing the industrial capabilities for the development of the corresponding equipment and then with mastering the fields of materials and recycling, as well as fleshing out any bottlenecks in these systems.

The issue of whether and to what extent to develop national resources, and the potential for exploiting foreign resources, must all be examined from this perspective: How is it possible to avoid becoming dependent on expensive, undependable foreign resources for critical materials in the same way we currently depend on such resources for fossil fuels?

3“Economics of Natural Resource Scarcity: The State of the Debate,” by Jeffrey Krautkraemer. Published by Resources for the Future, April 2005. Available in full here: https://bit.ly/2qNI9Aa

Discover the EnerFuture service: a long-term forecast (to 2050) of demand, prices, and CO2 emissions by sector and for all energies, plus power generation capacities and production levels by fuel. Three distinct scenario reflect different potential policy developments.