View all macro and energy indicators in the Venezuela energy report

View the detailed fondamentals of the market at country level (graphs, tables, analysis) in the Venezuela energy report

Approximately 65% of the oil production is exported. In addition, Venezuela exports oil products: 14 Mt in 2016.

During the COP21 in Paris in December 2015, Venezuela presented its national objective to reduce GHG emissions by 20% by 2030. The commitment will depend on financial aid and technology transfer from wealthy countries.

CO2 emissions from energy combustion have dropped by 24% since 2010 with the economic crisis. 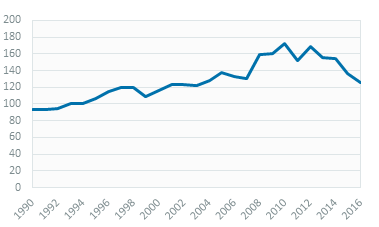