View all macro and energy indicators in the Niger energy report

View the detailed fondamentals of the market at country level (graphs, tables, analysis) in the Niger energy report

CNPC processes its crude oil production at the 20 000 bbl/d Soraz refinery, commissioned in 2011, which supplies most of the domestic needs in refined oil product (88%) with a production of 0.8 Mt in 2019.

In 2015, Niger submitted its Nationally Determined Contribution (NDC) to UNFCCC. The target is to reduce its GHG emissions by 3.5% by 2030 compared to a BAU projection; with external support, the target could be raised to 34.6% in 2030 (conditional target). 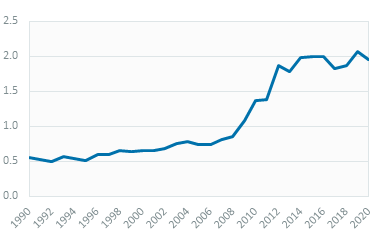