View all macro and energy indicators in the Gabon energy report 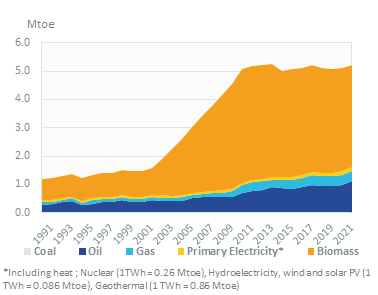 View the detailed fondamentals of the market at country level (graphs, tables, analysis) in the Gabon energy report

Oil production slightly decreased in 2020 and reached 10.7 Mt (10.9 Mt in 2019), which is still higher than 2018 production thanks to the exploitation of recent discoveries and the effort of companies specialized in maximizing the value of mature fields. Oil production is mainly offshore (81% of the total area). Previously, the country had recorded a long decrease in production since 2010 (-3%/year between 2010 and 2018). Even earlier, it had decreased by 30% between 1997 and 2002, from around 18 Mt to 13 Mt, due to the falling production of the main fields and the decline in reserves.

As Gabon is around 85% covered by forest, the country plays the role of a carbon "sink" by absorbing more than 4 times more CO2 than it emits (NDC inventory). In 2016, Gabon submitted its first Nationally Determined Contribution (NDC) with the commitment to reduce its GHG emissions by at least 50% in 2025 as compared to a BAU scenario, including LULUCF (Land Use, Land-Use Change and Forestry), which accounts for more than 60% of direct emissions, but excluding carbon stocks in forests (i.e. sinks).