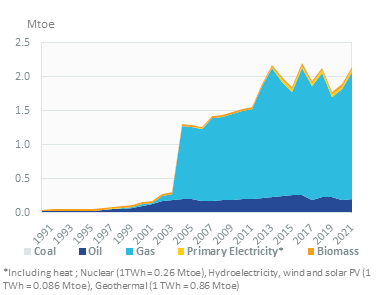 View the detailed fondamentals of the market at country level (graphs, tables, analysis) in the Equatorial Guinea energy report

Production of crude oil and condensates has been decreasing rapidly since 2007 (by around 6%/year) to 8.8 Mt in 2020. It increased dramatically following the commissioning of the first field of Alba in 1996 and then the Zafiro field, reaching a peak of 19 Mt in 2007. About 85% of the production is in the form of crude oil and 15% as condensates. Crude oil production comes almost entirely from three fields - Zafiro, Ceiba, and Okume - while condensates come from the Alba field.

Equatorial Guinea submitted its NDC (Nationally Determined Contribution) in 2018. It set a GHG emissions reduction target of 20% by 2030 and 50% by 2050 compared to 2010. The revision of the NDC is currently underway.

CO2 emissions from fuel combustion stopped rising in 2012 and have decreased by 50% since then, reaching around 4.5 MtCO2 in 2020. They increased sharply between 2001 and 2012 due to the high development of gas in industry, but then dropped in line with gas consumption.