View all macro and energy indicators in the Bahrain energy report 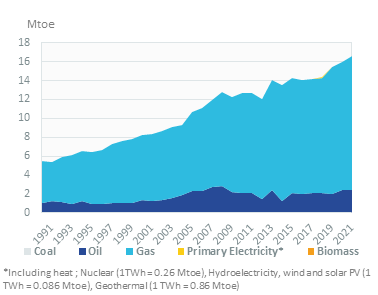 Gas supplies 86% of the total energy consumption and oil 14% (2018); those shares have remained relatively stable since 2000.

View the detailed fondamentals of the market at country level (graphs, tables, analysis) in the Bahrain energy report

In 2017, the Electricity and Water Affairs Minister launched the National Renewable Energy Action Plan (NREAP), which revises the previous renewable target to 5% of the public power capacity (i.e. excluding autoproducers) by 2025 and 10% by 2035. This corresponds to a renewables capacity of 255 MW in 2025 and 710 MW in 2035.

According to its NDC, the government of Bahrain has not set a GHG emissions reduction target, but it has launched strategies, plans and actions to contribute to lower GHG emissions.