View all macro and energy indicators in the Azerbaijan energy report

View the detailed fondamentals of the market at country level (graphs, tables, analysis) in the Azerbaijan energy report

In 2020, AREA (the Azerbaijan Renewable Energy Agency) replaced SAARES (the State Agency on Alternative and Renewable Energy Sources) to develop and implement renewable energy projects, along with various companies. The main objective of the agency is to increase the share of renewables in the power capacity up to 30% by 2030.

Alternative energy projects are funded through the Azerbaijan Investment Company (AIC) that was established in 2006.

Companies operating in the renewable energy sector are exempt from customs duties and taxes.

In its first NDC, Azerbaijan made a commitment to reduce its level of GHG emissions by 35% by 2030 compared to 1990. 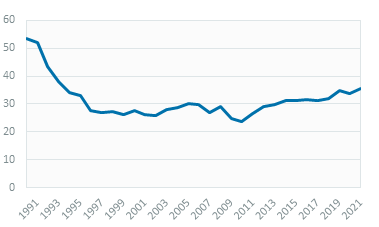