This brief has been prepared by Enerdata’s Research Department.

Electrification, a pillar of energy transition?

Electrification allows to improve both

Final energy uses are converting to electricity … to a certain extent

However, the observed trends are not the same for all countries and regions. In OECD countries, more specifically the United States (US) and the European Union (EU), the share of electricity in the final energy demand has increased by 1-2pp since 2000 with a stabilisation for the past five years due to progress in energy efficiency and advantageous climate conditions. In China, the dynamic is much stronger with a doubling of the share of electricity from 11% to more than 22% (higher than the rate observed in the US or the EU). This is mainly a result of fuel switch, the development of captive electricity equipment in buildings, tertiary sector expansion and a higher penetration of electric vehicles compared to other countries (due to public policies and investments aimed at reducing air pollution and developing  Chinese industry and job creation in this new sector). 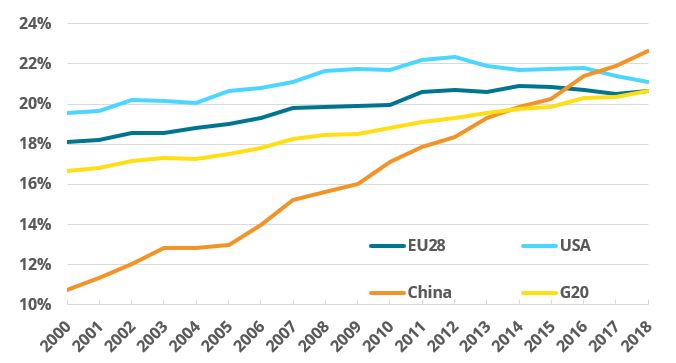 At world level, the global electricity demand is expected to increase by 80 to 90% to reach both Nationally Determined Contributions (NDCs) objectives (EnerBlue scenario) and a +2°C scenario (EnerGreen) in 2050. The share of electricity in final consumption would reach 29% in EnerBlue, and 36% in EnerGreen (in relation with a strong decarbonisation of power generation), due to higher energy efficiency efforts.

For some countries, such as the US, the EU or Brazil, it would mean a strong acceleration of electrification whereas China, India or Japan would need to keep up with the existing dynamic trend. 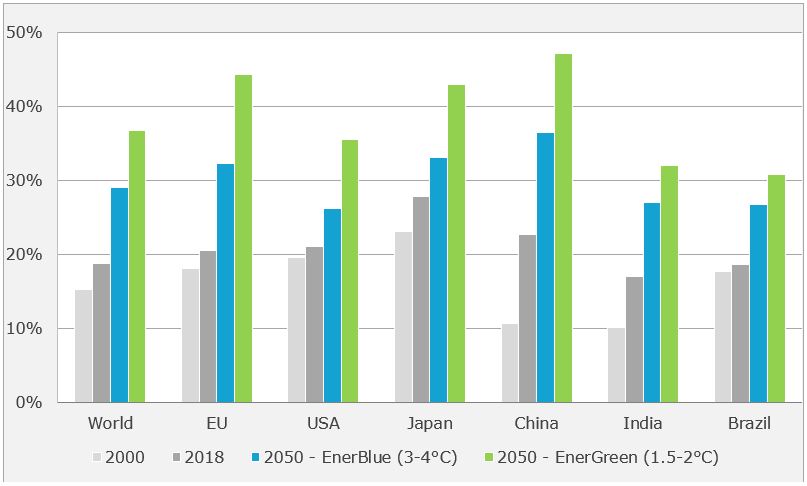 Several drivers can contribute to an increasing share of electricity in the final demand:

It is essential to decarbonate the power mix in order to harness the full potential of electrification regarding GHG objectives. Some progress has been made since 2012 with a decreasing carbon content of power generation, but it has proved to be far from sufficient. The overall power mix remains dominated by fossil fuels, especially coal. 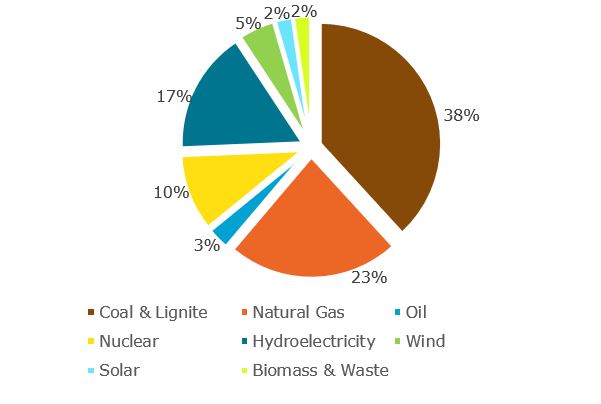 A strong acceleration in the decarbonisation of power generation is required to meet global climate objectives. 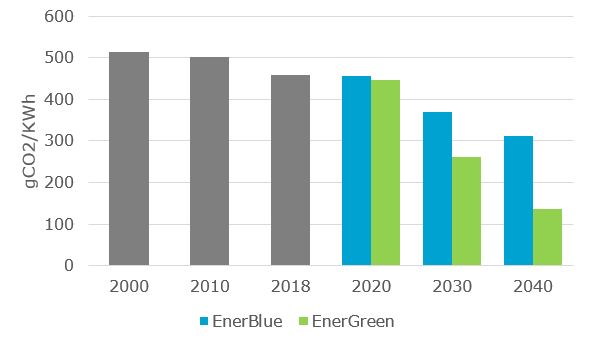 The main options to decarbonate the power mix are wind and solar, biomass, nuclear, fossil fuel switch, and Carbon Capture and Storage (CCS) in the long term.