Solar water heating in the world

Water heating represents about 15% of households’ energy uses in Europe, 20% in the United States and even 30% in Japan. Switching from electricity and gas to solar water heating could strongly reduce fossil fuel consumption and CO2 emissions.

World solar thermal capacity1 has increased 4 times since 2000 with two emerging country profiles. On one side, countries with a long-term promotion policy have a high share of systems installed per capita (Austria, Germany, Turkey, etc.) and in some cases reaching saturation (Cyprus and Israel). On the other side, a new market for solar water heaters (SWH) is developing for many countries, in particular in emerging countries, such as China and Brazil. 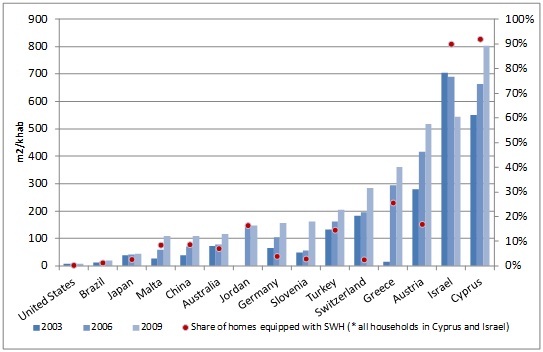 Cyprus is the world leader in terms of capacity per capita, followed by Israel, due to high solar radiation and support policies. More than 90% of households are equipped with SWH. China ranks first in terms of installed capacity, with almost 2/3 of the world’s capacity. Over the last few years, China has been the leader in solar water heater system additions, with 11 million m2 installed in 2009. In comparison, the three countries that had massively invested in capacities during 2009 lagged far behind China with Turkey “only” installed 380 thousand m² in 2009, Australia, around 200 thousand m2 and Portugal, 88 thousand m2. 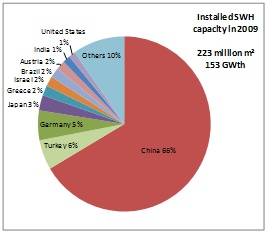 According to preliminary estimates, the SWH market is estimated to have risen to about 185 GWth in 2010, of which 70% of new capacities were installed in China and 10% in the European Union. The European market for SWH contracted again in 2010, by almost 13% after a 10% drop in 2009 due to the global economic crisis (slowdown in construction in countries with legislative promotion such as Spain or Greece, stop-and-go policy in Germany and the Czech Republic for subsidies, preference for solar PV incentives in France, etc.). In the European Union, the development of SWH systems is included in the National Renewable Energy Action Plans by member states and most of EU countries have set targets for solar heat by 2020. 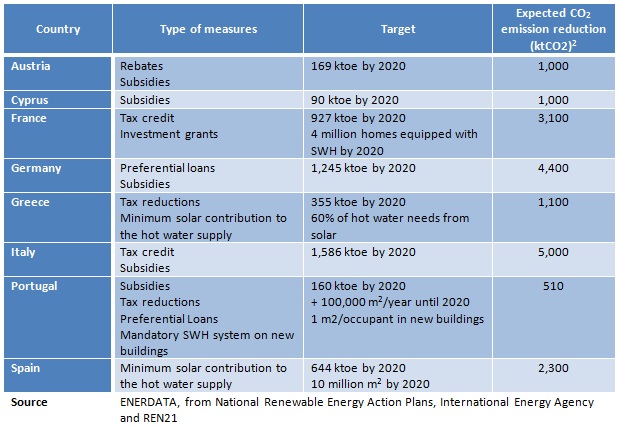 Outside Europe, China and India are implementing ambitious solar thermal policies, setting targets of 300 million m2 by 2020 and 20 million m2 by 2022, respectively. Subsidies are currently the main lever to promote solar water heating, but other incentives are under consideration. Some towns like Kunming (Yunnan) and Dezhou (Shandong) in China have set targets to accelerate the development of solar water heating (50% of buildings with solar hot water by 2010), while Shenzhen mandated SWH in all new residential buildings. India is planning to offer preferential loans and to make solar water heaters mandatory on new buildings. In the USA, where the market is still underdeveloped, SWH systems benefit from a 30% federal tax credit, while some States have also implemented credits and rebates. The influence of promotion tools on the solar water heater market development is particularly noticeable in Australia, where a policy was launched in 2000 that created tradable renewable energy certificates (REC) linked to SWH systems. The current installed capacity allows energy savings of around 13 Mtoe per year and savings should double in 2020 thanks to targets set by countries. 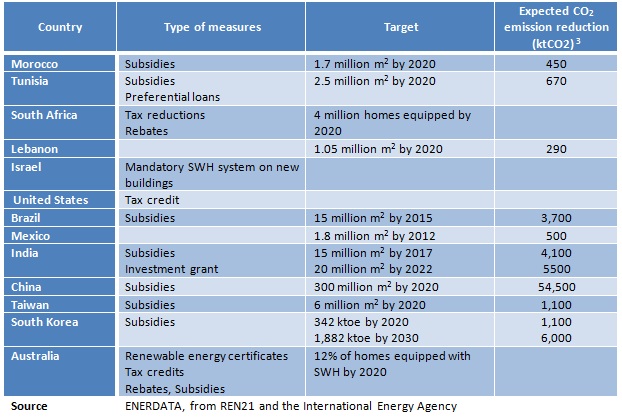