Nuclear perspectives: are "reject or embrace" the only options?

In recent decades, nuclear energy was perceived by many analysts, policymakers, and utility managers as a reasonably affordable option to generate bulk electricity while satisfying both supply security and climate change concerns.
The Chernobyl accident in 1986 almost stopped the development of the world nuclear industry in its tracks; 25 years later, a nuclear revival was starting to materialise.
After the Fukushima accident, the future of nuclear again became uncertain as countries reacted in contrasted manner. Some decided to exit, like Germany, while others like France and China committed to develop safer nuclear technology. Such divergent policies will strongly affect the world's energy path, and our EnerFuture scenarios, powered by the POLES model, help us to analyse how it will unfold over the next 20 years. 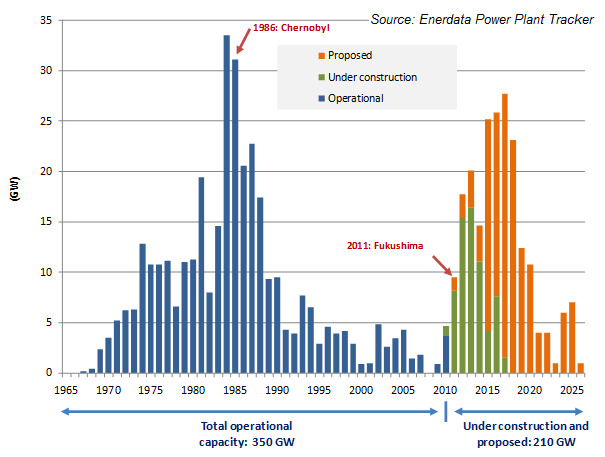 Germany's engagement to abandon nuclear, will have the country with the 5th largest installed nuclear capacity completely out of the sector by 2030. However for Japan, the 3rd nuclear country in 2010, it will take more time to decommission its fleet, but by 2030 more than 60% will be removed. Indeed, without any anticipated decommissioning, the relative youth of the Japanese reactors (22 years operating on average) will have a strong influence on their future energy mix. In addition, the development of thermal and renewables technologies in other developed economies will limit nuclear deployment to the replacement of decommissioned capacities. Consequently, by 2030, nuclear power will account for 16% of OECD electricity generation (compared to 21% in 2010) and 10% of world electricity generation (a decrease partly due to the total power demand increase).

Nevertheless, despite the Fukushima accident, nuclear prospects to satisfy the fast growth rate of electricity demand remain high, notably in Russia and Emerging Asian Economies. By 2030, world nuclear capacities are expected to increase by 37% in a "business-as-usual" case and developing Asia will represent one quarter of the total installed capacity (compared to only 1% in 2010).

Today, the world's most ambitious projects are being planned throughout Asia. In South Korea, Shin Koori's first unit (1 GW) began operation in 2010, with plans for five additional reactors by 2020; three of which are already under construction (a total capacity of 6.5 GW). In China, the Fuqing and the Ningde projects of 6 GW each are under construction, and half of their capacity should be commissioned by 2015. China currently ranks as No. 1 in the world for nuclear capacity under construction (26 GW in 28 reactors) and intends to obtain 60-70 GW of nuclear power by 2020. Following the adoption of the 12th Five Year Plan, that target could even be increased to 82 GW by 2020. India has also announced plans to increase its nuclear capacity by 60 GW within the next 20 years; with around 11 GW commissioned between 2012 and 2017. Both China and India have successfully developed fourth-generation pilot reactors, putting them at the leading edge of this sector.
For the time being, it appears that nuclear development will be limited mostly to emerging countries where the need for energy is a powerful incentive to continue developing the technology safely. Many OECD countries will move away from nuclear power by actively decommissioning or not renewing their nuclear fleets, largely for political reasons. In the short term, there does not seem to be much middle ground in the choices surrounding nuclear energy. 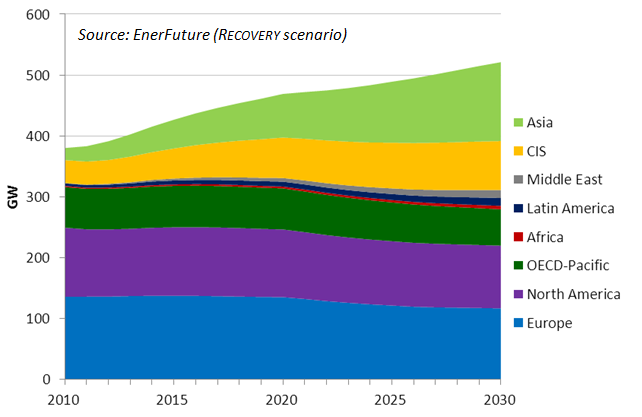 Prospective Outlook on Long-term Energy Systems (POLES) is a world simulation model for the energy sector. It is a techno-economic model with endogenous projection of energy prices, a complete accounting of energy demand and supply of numerous energy vectors and associated technologies, and a carbon dioxide and other greenhouse gases emissions module.

Is your business concerned by the future of energy?