India: Coal future in the country

As part of the Enerdata Forecast Services we looked at the India situation and the future of coal and its price formulas. India has been ramping up its production and imports to satisfy the continuous request of more and more coal to be used within the country. 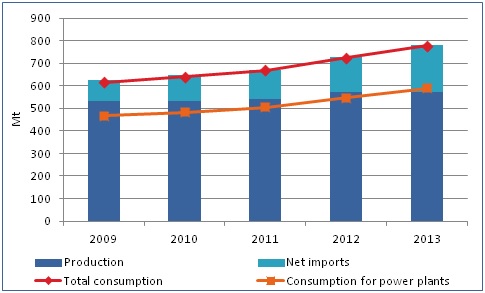 If we take a snapshot, then India’s coal imports dipped in April 2014, but the country’s import dependency is set to increase. India’s coal imports registered a surprising fall of 6% year on year last month to 15.2 million tons (Mt) as power and steel producers used up stockpiles that had been built up over previous months. But this import fall will be nothing more than a blip, and does not indicate a change in import dependency that has seen imports increase in 11 of the previous 12 months. Driving this import growth has been increasing demand for thermal coal as India invests in new coal-fired capacity with state-owned Coal India, which accounts for around 80% of the country’s total coal output, consistently falling short of its production targets. India has increased its coal-fired capacity by more than 20 GW in each of the past two years, largely due to private investment following deregulation of the sector in 2003. In 2012 the power coal-fired capacity increased by 21 GW and in 2013 by 22 GW respectively (source Enerdata Global Energy & CO2 Data). In 2013, new coal capacities made up more than 80% of the new installed capacities in India. 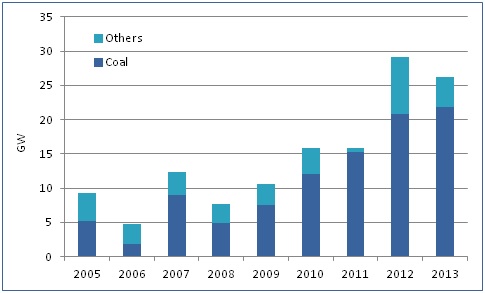 The government has also continued to provide generation fuel at prices below international prices in the form of captive coalmines and supply from Coal India at below market prices. Coal India’s April pithead mine price for coal with a gross calorific value of 5,200-5,500kcal/kg was 1,680 INR/ton, equivalent to US$28.30/ton, and with transport accounting for around 40% of the delivered coal price this provides a domestic coal price of around US$47.20/ton. By comparison the IHS McCloskey Indonesian sub-bituminous 4,900kcal/kg NAR index (which equates to a 5,200kcal/kg GCV) was US$58/ton in April. While Indonesian coal prices have been falling over the past three years, with the price depreciating by 37% since January 2011 when coal price was US$92/ton, the imported coal is still 22% more expensive than domestically produced coal. And, there are signs that coal prices may be bottoming out. Some Indonesian mines have closed due to the low prices, reducing production, and with demand for coal increasing there is expected to be upward price pressure in the second half of the year. With over 100 coal-fired projects in the pipeline, new installed capacity is to rise by 100 GW by 2020 (source: Enerdata Power Plant Tracker) . However, to meet this capacity growth will require domestic fuel availability and the ability of generators to pass on fuel costs. With coal dominating generation, and with Coal India falling short of its production targets in each of the last six years due to a mix of transportation issues and difficulties in obtaining environmental permits, India’s thermal coal imports have been steadily increasing. From the Enerdata Global Energy & CO2 Data database we can see that India imported 211Mt of coal in the calendar year 2013, up from 156 Mt in 2012. Of these imports, over half were from Indonesia. By comparison India’s domestic coal output was 725 Mt in 2012 and 778 Mt in 2013. The annual erosion in domestic output will continue until India’s chronic infrastructure is improved, with Coal India estimating it will have a shortage of 350 Mt in financial year 2016-17.   To reflect the growing import dependence on Indonesian coal, India''s Central Electricity Regulatory Commission (CERC) amended its coal price formula in April to include Indonesian coal prices. The price formula is used to calculate tariffs for generators using imported coal, with the new index based on 50% Indonesian coal, 25% Australian and 25% South African coal, replacing the previous 50:50 Australian and South African index. The Indonesian prices will be calculated based on an equal weighting between the Indonesian Coal Index (ICI) produced by Argus and Coalindo, and Platts'' Indonesian coal prices, while the South African coal prices are based on the API 4 index produced by Argus and IHS McCloskey and the Australian prices will be calculated based on the Globalcoal platform. CERC claims its revised index is aimed at reforming the power sector, which is struggling to meet growing electricity demand. And while the new pricing formula will benefit producers including private-sector Tata, Adani and Reliance that are setting up or have commissioned plants based on coal supplies from Indonesia, it will do little to inject confidence into India’s domestic coal market.