How is Gazprom adapting to changing market conditions?

The 2013 Gazprom’s results show that the Russian company is still the dominant gas exporter to the European Union (EU), which contrasts with its expected declining role announced over the past years. With 138 bcm delivered to the EU in 2013, Gazprom has increased its market share in the EU natural gas consumption from 24% in 2010 to 28% in 2013. Part of Gazprom’s market share increase can be explained by a fall of European Union LNG imports since the higher prices in Asia have re-routed the flows toward this continent. However, it is interesting to understand how the giant company has restored its presence in the EU while both parties are confronting their development models. On the one side, the EU, which faces constant declining gas production, is encouraging the development of spot markets to increase the market liquidity and transparency, and to diversify its supply for energy security reasons and to reduce its dependence on Russia. On the opposite side, Gazprom, which still holds the monopoly on the Russian gas export by pipeline, is expecting to raise its market share in the EU without abandoning its oil-indexed long-term contract based model. By keeping long-term contracts Gazprom intends to secure revenues over a long period to finance the huge investments needed to develop the large and remote gas fields like Yamal or those located in eastern Siberia where weather conditions make production costs much higher than current operated fields. Developing these new resources is strategic for the company since its market share in the Russian gas production has dramatically eroded since 2005. Although Gazprom still produced 73% of the Russian gas in 2013 (487 bcm), it is 15 percentage points below its level eight years earlier. 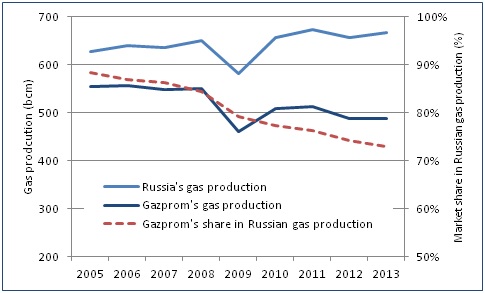 Over the past years, the Russian firm has been seriously challenged by two Russian competitors mainly: on the one hand, the independent company Novatek, the country''s second largest gas producer and, on the other hand, the state-owned company Rosneft that successively bought hydrocarbon producers TNK-BP (2012) and Itera (2013) to become the world largest crude oil producer. Both companies have urged the Russian government to end Gazprom monopoly on gas export, which they partly achieved as they both obtained licenses (along with Zarubezhneft) to export LNG starting from 1 December 2013. The intensification of competition on the domestic market can be explained by the constant rise of the regulated gas prices decided by the central government to allow Gazprom to finance its necessary investments in remote gas fields. According to Gazprom, the company made no profit from domestic gas supplies between 2000 and 2008 due to the undervalued regulated prices. The increase of regulated gas prices, which has reached about 15%/year since 2005, has created favourable conditions for the development of Gazprom’s competitors that have been able to offer discount prices, thus gaining market shares. 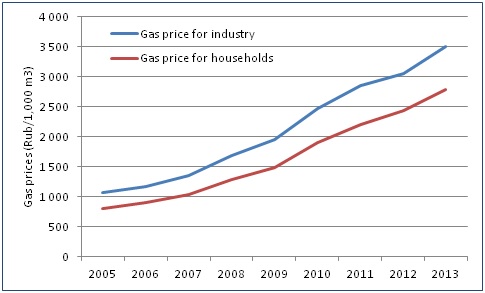 This increase in regulated gas prices was essential for Gazprom’s profitability since the domestic market made up more than half of its gas volumes sales in 2013 (56%). By ensuring a higher profitability in the Russian market, Gazprom’s has reduced its dependence on gas sales to the EU. As a consequence, Gazprom has been able to renegotiate downward its long-term gas supply contracts with European energy companies to maintain its competitiveness with spot prices on European gas exchange markets without endangering the company long term presence in the European markets. Indeed, Gazprom has curved its gas prices to European utilities such as E.ON-Rurhgas (Germany), GDF-SUEZ (France), Eni (Italy), Econgas (Austria) or PGNiG (Poland) up to a cost estimated to US$2.7bn in 2012 and US$4.7bn in 2013.

Although the company is not willing to let go its long-term contracts based model, it is not either keen to see its dominance in the European market evaporate. Thus, Gazprom as started to diversify its presence in Europe by entering the spot markets to diversify its sales channels and then its capacity to influence the gas prices levels in Europe: in the framework of an asset swap with Wintershall, a subsidiary of BASF, Gazprom has thus taken full control of Germany''s trading and supply gas company Wingas in December 2013. While Gazprom gas production continues to decline and competition on the Russian market intensifies, the company will have to adapt its economic model with regards to two major events that occurred in the fall of 2013: the loss of its monopoly on the export of LNG and the Russian regulated gas prices freeze (excluding inflation) from 2014 until 2016 (confirmed in April 2014). Further adaptations would be needed should the company loose the monopoly on gas transport that domestic competitors as well as the European Union are waiting for years. A way forward seems to be emerging: turn toward Asia, where countries strongly need natural gas to support their economic development and where gas price has been much higher than in Europe since the Fukushima event of March 2011. In this sense, Gazprom signed a Memorandum of Understanding in September 2013 with the Chinese company CNPC for the supply of 38 bcm/year from 2018 for 30 years. Sources: Gazprom, Publication of the quarterly report for the quarter IV 2013 (Russian) C. Locatelli, The Russian gas industry: challenges to the "Gazprom model", Cahier de recherche EDDEN n° 2bis/2013, June 2013 European Commission, Study on long term & short term Markets in Gas, 2013 J Henderson, J Stern, The Potential Impact on Asia Gas Markets of Russia’s Eastern Gas Strategy, The Oxford Institute for Energy Studies, February 2014