As part of the Malaysian Electricity Supply Industry (MESI) reforms, Malaysian government has implemented Incentive Based Regulation (IBR) from 2014. This resulted in an increase in electricity tariffs to cover the higher costs of domestic piped gas, coal and LNG. High gas subsidies, expensive LNG and declining gas production has created a supply security problem for electricity industry in Malaysia where around 45% of electricity was generated from natural gas in 2013. Future electricity tariffs in Malaysia are expected to reflect the changing fuel costs and also promote efficient service standards in the generation business. In this executive brief, Enerdata analyses the electricity tariffs in Malaysia and gives a brief introduction to its forecasting methodology for the end user electricity tariffs. Enerdata forecasting methodology is used by industry to determine the effect of the subsidy rationalization policies and electricity tariff revisions on their business model. Figure 1 shows the power mix evolution in Malaysia. Oil formed a major part of the Malaysian power mix till 1990. Driven by the change in energy policy due to oil crisis in 1970s, electricity generation companies quickly turned to natural gas and coal. The share of natural gas in power generation rose exponentially as shown in figure 1 and reached a maximum of 74% of the total power generation in 2000 from merely 20% in 1990. Coal market share was in a range of 5-12% of the total power generation from 1990 to 2000. After 2000, the share of coal increased quickly and in 2010, coal accounted for 34% of the power generation while the share of gas stood at 56%. 2011 saw a big shuffle in the generation fuel mix. Natural gas share received a big blow due to supply shortages. Generation from natural gas in 2011 was only 58 TWh: down by more than 12 TWh from 2010 levels. The supply shortages left power generation companies with multi-million losses as the gas fired plants had to switch to expensive distillates to maintain the electricity supply and there was no mechanism of fuel cost pass-through to end users. A cost sharing agreement was drawn between government, Petronas and TNB. Switching to distillates incur additional costs due to expensive fuel and higher logistic charges and is also detrimental to the gas turbine operation. Natural gas shortages led to an increase in the share of both coal and oil: coal share increased to 36% in 2013 from 34% in 2010 and share of oil increased to 7% in 2013 from 3% in 2010. In power generation, gas is the only fuel with a negative trend with an average decrease of 2% per year over the last five years (2009-13), while coal and oil had a very rapid progress (respectively 14% and 50%/year). 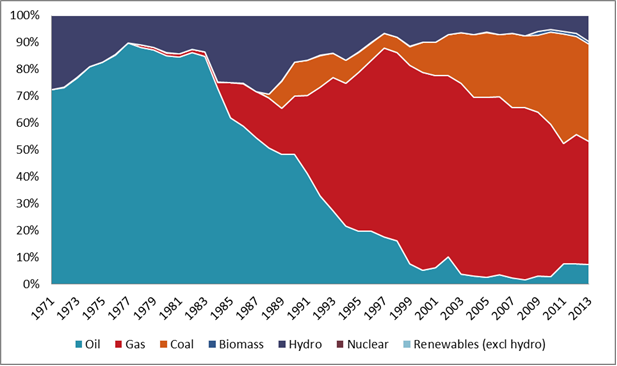 Shortage of natural gas, increase in consumption of distillates and resulting losses for utilities like TNB has made it necessary for Suruhanjaya Tenaga (Energy Commission of Malaysia) to plan the phase out of gas subsidies and establish a transparent method of setting the electricity tariff that includes fuel cost pass-through mechanism. Without passing the costs to end users, it will not be possible to raise the gas prices in a sustainable manner which will further deteriorate the fuel supply problem in Malaysia. Conservative estimates of the Ministry of Finance put the total fuel subsidies to MYR28bn (US$8.9bn) in 2013 which is straining the government budget. Under the Subsidy Rationalization Program (SRP) launched in 2010, the government decided to increase the electricity prices at regular time periods as shown in Table 1. Implementation of SRP was not done and tariffs were left untouched till 2011. In 2011, electricity tariffs were increased by 7% and then in 2014, Incentive Based Regulation was implemented that included a mechanism for Imbalance Cost Pass-Through (ICPT) as well as base tariff. ICPT includes fuel cost pass through and other generation specific cost adjustment. Base tariff reflects the investment costs, O&M costs, base (reference) fuel costs and other factors like inflation rate and exchange rates. The increase of MYR0.05/kWh (US$1.5c/kWh) in January 2014 included MYR0.041/kWh (US$1.2c/kWh) of ICPT and MYR0.009/kWh (US$0.3/kWh) of base tariff revision. ICPT increase had three components: domestic piped-gas tariff revision from MYR13.7/MMbtu (US$4.2/MMbtu) to MYR15.2/MMbtu (US$ 4.7/MMbtu), coal price increase from US$ 85/t to US$87.5/t and regas LNG price at MYR41.68/MMbtu (US$12.9/MMbtu)2. Figure 2 shows the components of price increase. Provision to include the LNG price accounted for the biggest increase in the electricity tariff. 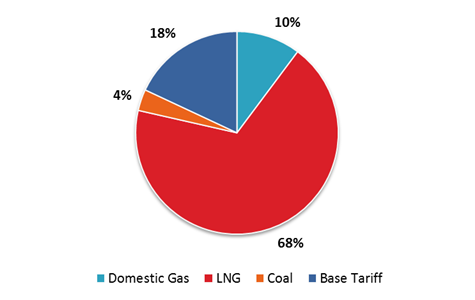 Electricity tariff revision is part of a major reform that aims to restructure the electricity industry in Malaysia. To make the tariff revision acceptable and affordable to the public, government will maintain control over the end user tariff and will provide selective subsidies to low income households. Creating a stabilization fund to finance the difference between cost of supply and end user tariff is also part of the tariff revision policy. Enerdata forecasting methodology for electricity prices Changes in policies related to tariff revision always come with uncertainty. The political sensitivity of the electricity and gas prices makes it necessary for businesses to equip themselves with a full 360 degree understanding of the different price level scenarios and resulting effect on their future profits. Enerdata has developed its in-house POLES model to simulate the global as well as country level energy markets covering different fuel types like oil, gas, coal, renewables and nuclear. For a regulated market like Malaysia, we employ equation 1 to forecast the electricity prices till the market is fully liberalized3.

Future power mix, which will determine the changes in power production costs in equation 1, will play an important role in determining the tariff rationalization policies. As per Enerdata Power Plant Tracker, around 13.5 GW of capacity is under construction/approved in Malaysia. The major players are Sarawak Energy (2.4 GW), TNB (4.3 GW), Sarawak Hydro (2.4 GW), Mitsui (2.0 GW) and Pengerang Power (1.2 GW). Coal and hydro together account for 80% of the capacity under construction/approved whereas gas only accounts for 20%. This shows that the dynamics of coal market price is set to play a major role in future tariffs.. Furthermore, considering the capacity planning status of different energy till 2030 as shown in Figure 3, Enerdata also forecasts that the renewable will play a major role in the future power mix. 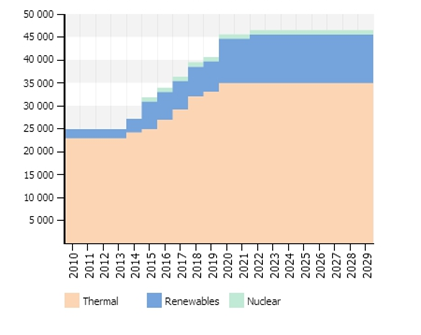 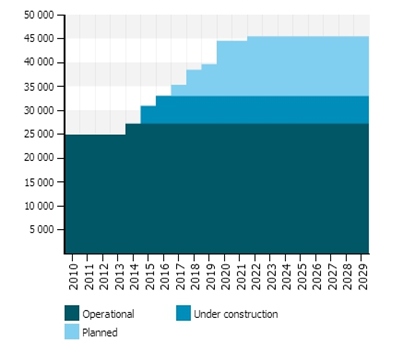 [Subscription is required for more details on the forecasted price levels] This executive brief is produced as part of our research in Gas/LNG and Power sector. If you are interested to know more about our Gas/LNG and Power Services, please contact us at asia@enerdata.net Notes: 1 Incentive based regulation refers to regulation policies that incentivize the utilities to perform efficiently and also ensure electricity tariff revision to reflect the generation costs. 2 Source: Tenaga Nasional Berhad 3 After full liberalization of the market, we use econometric and supply demand equilibrium techniques to forecast the short term and long term prices. Please contact us for more details on the methodology. For a sample case study, please refer to Enerdata Forecast model of electricity price in Japan.