14 Mar 2019
What is the reality of the transition to alternative fuels in transport?

This month, we examine the energy transition in the transport sector, including which technologies are at the forefront and which countries are leading the way. This brief is by Enerdata’s Scientific Director and Co-Founder Bruno Lapillonne.

One of the great challenges of the energy transition1 in transport is to shift the use of oil products (mainly gasoline and diesel) to alternative fuels.

These alternative fuels can be either decarbonized energy sources (such as biofuels) or energies with a lower carbon content (such as electricity2 and, to some extent, natural gas) which also significantly reduce emissions of local pollutants3.

In Some Countries, the Transition is Already Visible

They are followed by China, France and the UK, with around 10%, as shown in Figure 1. Some countries outside the G20 have made very good progress, especially Sweden (the front runner), and to a lesser extent, Thailand, Iran, Peru, Singapore and Norway. These are also generally the countries with the strongest progression of alternative fuels (+20 percentage points for Sweden from 2000 to 2017, +16 for Thailand and Iran).
In Brazil, Argentina, France, the UK and China, the transition has been generally slower than in these leading countries (+10 points since 2000 for most of them).

At the global level, the progression is slow and alternative fuels represent only 6% of transport consumption (+4 points since 2000). 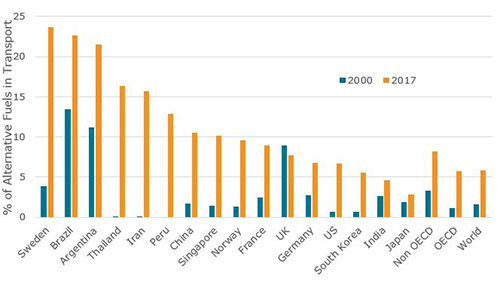 Natural gas has a high market share in Iran (16%), Argentina(13%) and Thailand (10%). Its purpose is mainly to diversify supply and reduce dependence on oil. This is probably not the best strategy for a transition to low-carbon fuels, unless an increasing share of this gas is renewable, as is planned in some countries.

If we exclude natural gas, the leaders are Sweden and Brazil, with a share of biofuels slightly above 20%. They are followed by Norway, with around 10%. Additionally, Sweden and Norway both have almost completely decarbonized electricity mixes (98% as of 20175).

As shown in Figure 2, Singapore is the world leader for the electrification of transport, thanks to a high share of rail transport. But the country is still far from achieving a decarbonized power mix – standing at only 3% decarbonized as of 2017.

In the long-term, the progressive decarbonisation of the electricity supply, as planned in most G20 countries, makes simply raising the penetration of electricity in transport an attractive solution. However, progress thus far has been minimal in all but a few countries. Overall, the electrification of transport is hardly noteworthy.

However, in the medium-term more progress is expected thanks to the penetration of electric road vehicles (mainly light vehicles). Progress is also expected in the realm of public transport, but mostly in the longer term due to the huge investments involved.
Although the penetration of electric vehicles is still low (generally below 0.5%)7 , it is advancing rapidly in some countries.

According to EnerFuture projections from Enerdata, the share of decarbonized fuel (i.e. biofuels and decarbonized electricity) in transport could reach 26% in 2040 at the world level in a voluntarist scenario (Enerdata’s EnerGreen Scenario11, which represents the best-case scenario for decarbonisation), albeit with quite contrasting levels of adoption among countries. As shown in Figure 3, the projected share of total decarbonized fuels varies: 36% in the EU, 30% in the US and only 20% in China. The gap between China and the US is mainly due to stronger projections for biofuel adoption in the US. While the EU is expected to keep pace with the US on biofuels, greater decarbonisation of electricity will allow the EU to take the lead overall.

Figure 3: An “EnerGreen” Future – Decarbonisation of Transport Improving by 2040, But Not Uniformly 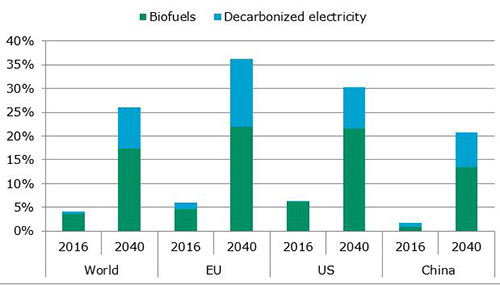