In 2013, 5.6% of global electricity production was generated by renewable sources (excluding hydroelectricity), and biomass accounted for 36% of the renewables supply.

The 5th assessment report of the Intergovernmental Panel on Climate Change, released last April, foresees an increasing deployment of bioenergy with tighter climate change targets, with projection of 35% of total primary energy from bioenergy in 2050, up to 50% in 2100. Solid biomass is increasingly being used for electricity production, either in dedicated biomass power plants or co-fired in coal power plants to reduce CO2 emissions. Between 2000 and 2013 the global electricity production from biomass grew from 170 TWh to 466 TWh. In the same period, production in the E.U. increased from 47 TWh to 168 TWh and in the U.S. from 72 TWh to 78 TWh, while Japan produced 38 TWh of electricity from biomass in 2013. 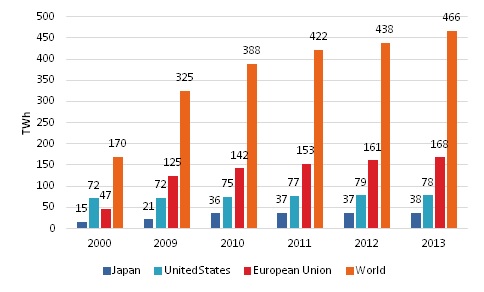 The growing biopower and bioheat markets are driving the production and trade of wood pellets across the world. 18.5 Mt of wood pellets were produced globally in 2012, with around one third of which were produced in North America and largely shipped to Europe. Last April the Japanese Basic Energy Plan for the next five years was published. The document acknowledges the importance of renewable energies for three main strategic reasons: - increasing Japan’s domestic production while reducing imports for energy security; - mitigating global warming; - promoting distributed power generation to revitalize regional economies. - The target is to increase the share of Japan’s power supply from renewable energy sources to more than 20% by 2030. Under the current Japanese FIT system in force since July 2012, power companies buy electricity at set rates, namely at US$c 33.1/kWh for non-residential solar power, US$c 22.7/kWh for onshore wind power (>20kW), US$c 28.2/kWh for geothermal power (>15 MW), and US$c 14.1/kWh to US$c 42.3/kWh for biomass derived power. Since this system was introduced, the number of power generating facilities using renewable energies has steadily increased. 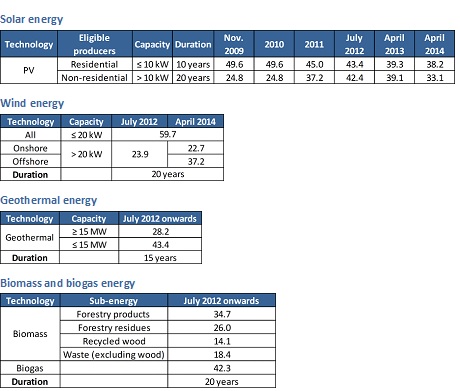 Since the introduction of the FIT program, the number of biomass power generation facilities is growing. As of March 2014, 90 MW of new generating capacity from biomass plants was installed in the country since the introduction of the FIT scheme. This amount is very tiny in comparison of Japan needs and Japan government had to do more. We have noted an improvement on this side and sources indicate that more such facilities are under construction and power generation from wood materials is expected to increase further. Indeed, last March the Trade Ministry approved projects with a combined capacity of 691 MW in a one-month period, adding to the 874 MW of capacity that had been approved since the introduction of the incentive program in July 2012. Some power companies started to use wood pellets for power generation in co-firing plants, and this has driven the domestic production of wood pellets, which has increased about 26-fold to 98 kt produced by more than 100 pellet plants in the country. At the same time imports of wood pellets from overseas countries have grown as well. In 2013, 84 kt of wood pellets were imported, mainly from Canada. This makes Japan one of the largest consumers of wood pellets in Asia. 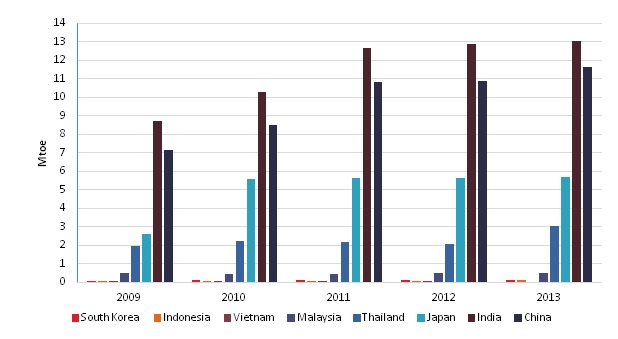 More data and information can be found in the new Enerdata Biomass Platform. Please send your enquire to asia@enerdata.net if you would like to learn more about the new product. Notes: 1In order to make comparisons between the years easier, the 2013 exchange rate of US$1= JPY 96.75 has been applied to all the tariffs provided in the texts and tables.