This analysis has been written by Patrick Criqui member of Enerdata’s Expert Panel and Senior Researcher at CNRS. Will the decrease in oil prices, from $100/bbl in the summer of 2014 to less than $30/bbl today, pull down the price of other fossil fuels, i.e. coal and natural gas? It’s not obvious, because even if all energies have significantly declined since the highs of 2008, it appears this time that the oil price decline followed that of US gas and coal and not the other way around. In the world of energy, after the oil price shocks of 1973 and 1979, the question of oil as a “benchmark price” for other energies constituted a recurring theme. There were very good reasons for this. Recall that before the nationalizations of 1970 there wasn’t a real international oil market because the transactions were within integrated companies from production to distribution. And note that again the “spot exchanges”, while they reveal a price, only represent a small part of physical transactions in energy markets, which are performed most often in the context of long-term supply contracts. However, the price of oil most often serves as the baseline index for these contracts, in particular for natural gas.

But there is another reason why the price of crude oil can influence other fossil fuels: “Oil is a liquid,” recalls Paul Frankel, which can be easily transported and storable; these physical characteristics have long allowed oil to be the swing fuel in the global energy system. Oil could satisfy all energy needs, from heating to producing electricity, and was irreplaceable in transport and chemistry. This asymmetry in the capacity of different fuels to satisfy diverse needs explains why the price of oil had been the measuring stick of energy prices: if it fell, it required a stronger competitive pressure from other sources; if it increased, then the pressure eased. The conditions today are no longer the same because in all industrialized countries, and increasingly in emerging economies, oil is reserved for specific uses (transport and chemistry), while oil-based heating and electricity production are increasingly marginal. Why then does a strong link between the oil price and other energies subsist? If there remains a significant correlation, the casual links in the new energy scene are no more what they were.

A Natural Index beginning in 2000

To explore the simultaneous fluctuations in the prices of oil, gas and coal, a “natural price index” can be used: in 2000, the price of oil was $20/bl, coal was $20/t and natural gas was $2/MMBtu. This is really a pure coincidence since the amounts of energy are not the same: a price of $20/bl of oil corresponds to a price per ton of oil equivalent (toe) of $140/toe, $20/t of coal amounts to $30/toe; and finally, $2/MMBtu to $80/toe. The differences in value effectively reflect the hierarchy of energy qualities: in 2000, the value of one energy unit of coal and gas respectively represented 21% and 57% of that of oil. We can thus select the prices of four representative energy products (see the graph below). For oil, an average of three benchmark crudes: West Texas Intermediate, North Sea Brent, and Dubai crude. For natural gas, it is necessary to distinguish the price on the Henry Hub (major gas interconnection in Louisiana) in the United States and the price charged by Russia’s Gazprom on the European market. Finally for coal, we consider the export price from South Africa.

Figure 1: Prices for energy sources: in $/bbl for oil, $/ton for coal and $/MBTU for gas 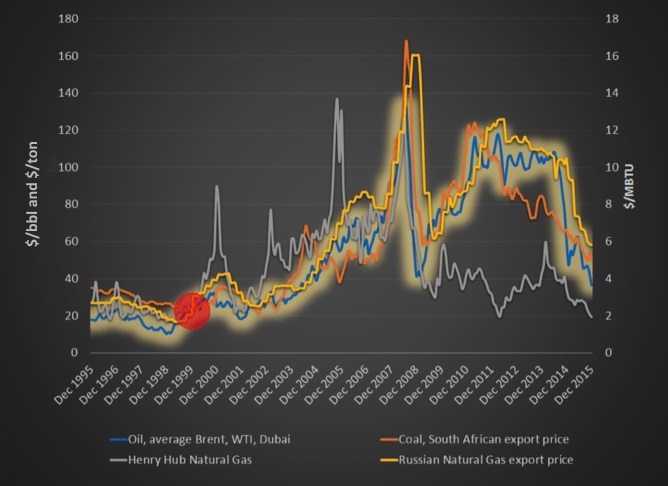 From the convergence point in 2000, it becomes possible to trace the evolutions of these prices. One can note that most often the variations are of the same magnitude and are often simultaneous. However differences do appear at times, revealing new conditions of the energy industries. In order to analyze the dispersion around changing oil prices, we outlined a “halo” surrounding this price series corresponding to more or less $10 of the core value.

The reporting period begins with a downward phase, with small deviations from 1995 to 2000. At that time it meets the fixed point already mentioned: $20/bbl, $20/t, and $2/MMBtu. Then prices begin rising, accompanied by the acceleration of growth, driven by industry in emerging countries and by the debt of Northern countries. Some point to this period as the “super-cycle of raw materials”. For energy, the price of oil slowly rises until 2003, before following a rapid rise that led it to the height of $140/bbl in the summer of 2008, right before the fall of Lehman Brothers. Remarkably, the other energies remain in the halo around the price of oil, which means that their relative price, with the quality discount already mentioned, is maintained throughout this period. Only one exception: US natural gas, with at least three price peaks at over $8/MMBtu over this period (2000, 2002, 2005) pushing it from the oil halo. It is during this time that the future shale gas revolution builds up ... After the boom, the economic crisis hits in just a few months. From the summer to winter of 2008, the energy prices pass from level $140-160 ($14-16 for gas) to a level of $40-60 ($4-6 for gas), i.e. a division by three.

This is the time when US gas diverges. As early as 2009, oil, South African coal and Russian gas rise up to level $100-120 ($10-12 for Russian gas). The gas at Henry Hub remains glued to the floor, around $4/MMBtu with peaks up to $6 and declines to $2. This is clearly the result of the shale gas revolution which overturns the energy economy and soon the entire US economy. This revolution was prepared by decades of research on synfuels but was triggered by the technical convergence of multidirectional horizontal drilling and hydraulic fracking, made possible by high prices from the previous decade. As for Russian gas, it remains attached to oil with the gap widening between gas in the United States and in Europe: between 2012 and 2014 the price of gas is two and a half times higher there. As the price of gas in Asia is even higher than in Europe, (more than $15/MMBtu for Japanese imports between 2011 and 2014), we understand that the United States benefited from a huge competitive advantage, which lead to a reindustrialization campaign based on cheap energy and even to a relocation of basic chemistry. This also explains how the Obama administration could base its climate policy primarily on the replacement of coal by natural (shale) gas in electricity production. Recall that one kWh produced from coal leads to two times more emissions than from gas. This evidently does not take into account fugitive methane emissions associated with shale gas production and avoids mentioning the cost of local environmental impacts. The European gas supply, dependent on Russian gas and indexed to oil prices, remains very expensive in 2014. Especially since the price of coal on the world market, after remounting in 2009-2010, quickly plummeted due to the decline in US consumption. And that is why thermal power plants operating in Europe, particularly in Germany, are coal plants and not gas power plants. At the same time the prices of emission quotas on the European market are at insignificant levels, largely insufficient to stop the comeback of coal in the country of the Energiewende, “the energy revolution.”

US Gas a New Benchmark Price ... but for How Long?

Let’s summarize. While oil is increasingly focused on captive uses (fuels and petrochemicals), the field for competition between gas and coal is that of electricity production. We have seen that gas prevails in the United States where it has become a central (if not the only) element of US climate policy and of its Clean Power Plan. As the demand for US coal diminishes, the subsequently falling coal prices affect the European market. And as Russian gas remains indexed to oil, gas is removed from power generation in Europe. US gas has therefore led to lower coal prices, but it was not until 2014 that oil began to fall as well. Seemingly unrelated if not for one depressing factor: the general economic turndown. But it isn’t that simple; because what has until now created the resilience of shale gas to lower prices is that their development had been supported by that of shale oil. And it is precisely against shale oil that Saudi Arabia triggered its second price war at the end of 2014. For how long will non-conventional hydrocarbons in the United States place pressure on the price of fossil fuels? It’s impossible to tell today. Shale gas has resisted for a number of years. Yet the price war could be more deadly concerning oil. If the “US shale industry” were severely hit it would have a strong collateral effect, returning prices back to normal with a re-convergence and synchronized recovery in the price of fossil fuels. This article was originally published in French by The Conversation France