View all macro and energy indicators in the Singapore energy report 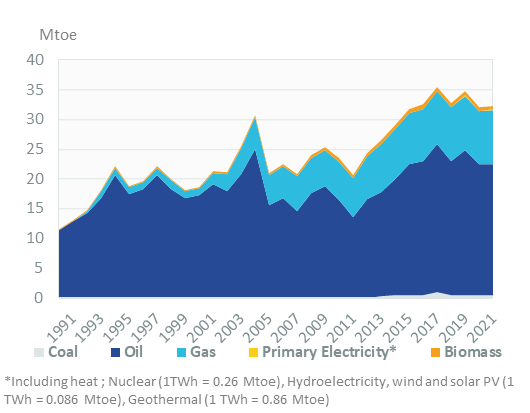 View the detailed fondamentals of the market at country level (graphs, tables, analysis) in the Singapore energy report

In spite of the absence of oil resources, Singapore is a major oil hub in Asia. It is the world's third largest oil products trading place. Thanks to its geographical position, at the extremity of the Strait of Malacca and on the shipping, routes connecting the Middle Eastern producing countries to the Southeast Asian importing countries, Singapore is a key crossing point for oil trade. Moreover, the country built an artificial island, Jurong Island, entirely dedicated to the oil industry. Singapore is a big refining centre, with a capacity of 1.5 mb/d.

Development would be supported through the SolarNova programme. The Housing and Development Board (HDB) plans to install PV panels on half of its rooftops in the coming years. The city state also plans to double the floating solar capacity to 160 MW and to add 200 MW of energy storage system (ESS) by 2025. In October 2020, the first ESS facility was installed for a test-bed (2.4 MW).

Singapore ratified the Paris Agreement in 2016. In its first NDC, the country aims to reduce the GHG emission intensity by 36% from 2005 levels by 2030 (65 MtCo2eq), with an aim of achieving peak emissions around 2030. On 31 March 2020, the country submitted an enhanced version of its first NDC, which includes nitrogen trifluoride gases (NF3) within the peak emissions ceiling and kept the same reduction target.