Total energy consumption increased by 12% in 2018. It is mainly covered by oil (48%) and biomass (33%). Hydropower and geothermal (primary electricity) and gas cover the remainder (10% and 9%, respectively). 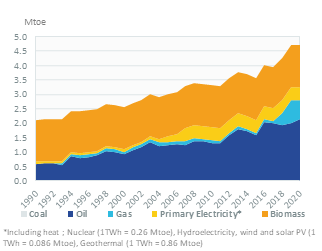 View the detailed fondamentals of the market at country level (graphs, tables, analysis) in the Papua New Guinea energy report

The country has one refinery with a capacity of 32 500 bbl/d.

In 2016, the Government submitted its NDC: it aims to become carbon free by 2030 in the electricity sector (100% renewables) if funds are available, which corresponds to the official 2050 target of PNG's Vision 2050.

CO2 emissions from energy combustion have quadrupled since 1990, reaching 7.3 MtCO2 in 2018, with significant fluctuations.