The most comprehensive and up-to-date annual energy database.

Energy Forecasting is a 2 days training to learn to design and interpret energy forecasts.

The most in-depth RES auctions database with worldwide coverage

To achieve their ever-increasing GHG emissions reduction targets, including, for many of them, carbon neutrality pledges, all countries are using renewable energies sources (RES) as one of the main levers. Public authorities are playing a major role as energy regulator to allow RES technologies to be competitive compared to conventional energy sources. This includes subsidies and remuneration schemes such as the feed-in-tariffs, feed-in-premiums mechanisms and, increasingly, more market-based support instruments and in particular auctions.

Enerdata’s RES auctions monitor is a very detailed, regularly updated database showcasing past and current auctions on a global level.

*Other country dashboards available on request.

In the dynamic world of renewables, Governments show strong ambitions to fight climate change and lead energy transition via notably Carbon Neutrality pledges by the next decades. These agenda translate into targets in terms of RES share in national power capacity mix and final consumption to achieve. Thus, staged planning of new RES capacity development or existing RES upgrading are set out by the public authorities to set the course in the national RES strategy.

In the renewable market, public authorities are playing a major role as energy regulator enabling RES technologies to compete with incumbent fossil and nuclear technologies. As recent technologies supported by national energy strategies, RES capacity development has been and is still being subsidised by the Governments. Success in renewables is indissociable from public subsidy policies and remuneration schemes, such as the feed-in-tariffs and feed-in-premiums mechanisms.

Observing the significant fall in RES technologies costs (e.g. LCOE) over the past decade, Governments tend to rely more on market-based support instruments to reduce public-funded subsidies and let market and competition decide on RES prices and related revenues. Thus, Governments with the experience in other infrastructure fields  such as the telecommunications are increasingly implementing competitive bidding procedures or auctions to offer a pre-determined RES volume of which prices are determined from the most competitive bids given by auction’s participants or bidders. RES auctions do not necessary exclude public support policies as the winning bids determine the level of prices often associated with a remuneration scheme, such as a feed-in-premium.

Country snapshot on a specific technology 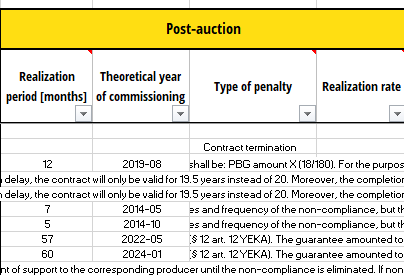 Benefit from a full demonstration and Q&A session with our specialists.