Enerdata published its annual analysis of world energy demand, based on its 2012 data for G20 countries.
This report confirms several ongoing trends initiated in previous years, and notes an acceleration for some of them. Beyond these trends, noticeable shifts are the significant variations within the power mix, particularly between gas and coal, and the growing weight of the BRICS1.

The BRICS are driving the growth of the world energy demand

Conversely, for the fourth year since 2008, the G72 countries’ energy demand shrunk; by 1.6% in 2012. Except for Germany and the UK, the five others countries reduced their energy consumption, with Italy recording the highest drop (-4.2%).

The BRICS energy intensity reduction of 1.8% observed in 2012 was mainly produced by China and Russia while India and Brazil recorded a rise in their energy intensity primarily driven by industry. 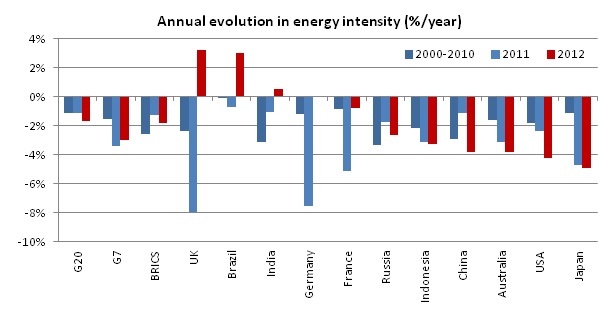 The evolution since 2000 of world energy consumption has been driven by China and India with a growth of their energy consumption by around 5% on average and an energy intensity 70% higher than the G7’s. Large energy producers such as Russia, Saudi Arabia and South Africa have high energy intensities as their economies rely on energy-intensive industries made possible by cheap energy prices.

The year 2012 saw significant changes in energy consumption trends as coal consumption growth slowed down significantly (1.3%) compared to 2011 (5.1%) while gas demand growth continued to increase by more than 2%.

Among G7 countries, strong countervailing effects were observed between gas and coal in the USA and in Europe. The massive development of unconventional gas production in the USA has made domestic Henry Hub gas prices drop by 30% in 2012, from US$4/MMBtu on average in 2011 to US$2.75/MMBtu in 2012 (yearly averages). As a result, American power utilities realised a coal-to-gas switch to give priority to gas as the cheapest energy source. 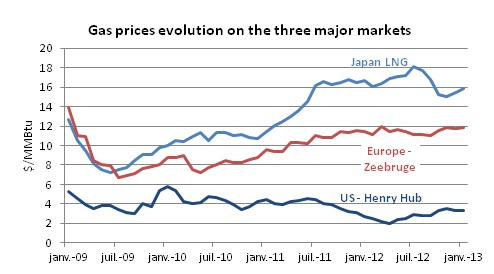 Consequently, overabundant US coal was exported at very competitive prices resulting in a coal price drop of 24% in Europe in 2012, from US$143/Mt in 2011 to in US$109/Mt in 2012. This produced a large substitution of gas to coal in power generation; the opposite move as observed in the USA. As a result, coal exports from the USA to Europe increased twofold in 2012 compared to 2011. 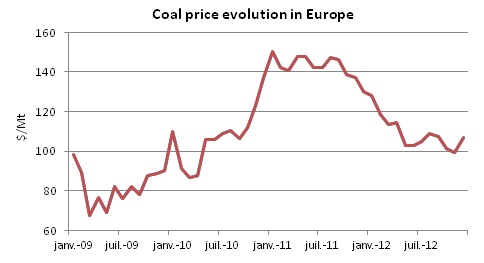 This change in the power mix was particularly marked in the UK (where coal increased from 30% to 40% in the electricity mix between 2011 and 2012), in the Netherlands (from 22% to 28%), in Spain (from 14% to 17%) and in Italy (from 17% to 19%). It is also true in Germany, where coal was already the major fuel. This massive increase in the use of coal, that is less efficient than natural gas for producing electricity, led to a drop in the average efficiency of thermal power plants in all these countries, with the highest reduction observed in the UK (from 44% in 2011 to 41% in 2012). These countries also experienced a subsequent increase in CO2 emissions from power generation (+ 10% of CO2 emissions per kWh produced in the UK between 2011 and 2012 for example).

For the eleventh year in a row, with the exception of 2009, gas consumption increased in 2012. It rose at a pace of 2.6%/year, higher than the historical average of 2.1%. This trend was mainly driven by the U.S. demand, which represents a third of G20 consumption, with a +4.6% increase boosted by the use of shale gas. In Japan, gas consumption surged by 10.8%/year, close to the 11.6% recorded in 2011 following the Fukushima accident. In China, natural gas consumption grew half as fast as in 2011 and at a slower pace compared to the 2000’s decade (15.6% rise on average). South Korean gas consumption continued to progress by more than 8% in 2012, in line with its progression observed since 2000. Conversely, Russian gas consumption (20% of the G20 gas consumption) shrunk by 0.9% partly due the commissioning of efficient gas-fired plants (more than 6 GW of CCGT capacity were commissioned in 2011 and 2012, i.e. about 90% of the new gas-fired plant capacities). European gas consumption dropped by 1.9% with severe reductions in UK and Italy as a result of the substitution to coal in power generation. The cold winter in Europe partially offset the decrease in the gas consumption; this drop would have been even higher under normal climate conditions.

Oil demand increased by 1% driven by the largest energy consumers in Asia, with dynamic growth in China (+6%), India (3.8%) and Japan (3.5%); Latin American countries recorded significant increases, with Brazil (5.3%), Argentina (3.8%) and Mexico (3%); while Russian growth achieved 3.7%. With the development of shale gas, the USA kept their oil consumption trend heading downward with a decrease of 1.9%, following the 2.4% drop in 2011, leading the country to its lowest annual demand growth since 1992. European countries recorded the same reduction as in 2011 (-3.4reflecting the weak European economy, high oil prices (US$112/bbl for the Brent on average in 2012), the continuing switch to natural gas in thermal uses as well as the growing penetration of efficient vehicles. 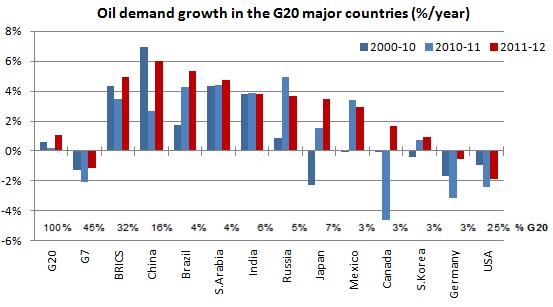 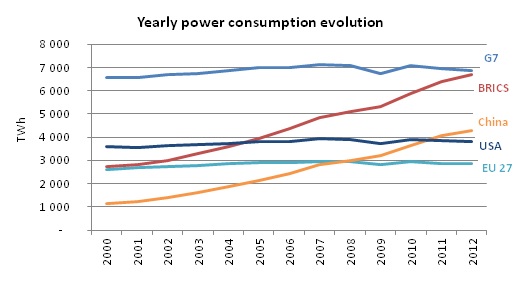 Despite the global cost reduction of renewable energy sources, 2012 has shown a slowdown in the progression of new installations compared to the trend observed over the last five years. The European Union recorded the largest slowdown due to changes in support schemes and reductions in feed-in tariffs. With a freeze of its feed-in tariffs in 2012, Spain has significantly reduced its growth, as well as Italy where a tremendous amount of new capacity was installed in 2011. Germany continued to break records with 7.6 GW of additional PV capacity installed in 2012 and 2.4 GW of wind energy systems. The wind sector was boosted by China and the USA which each installed more than 13 GW of new capacities in 2012. Both countries also installed more than 3.5 GW of PV capacities. 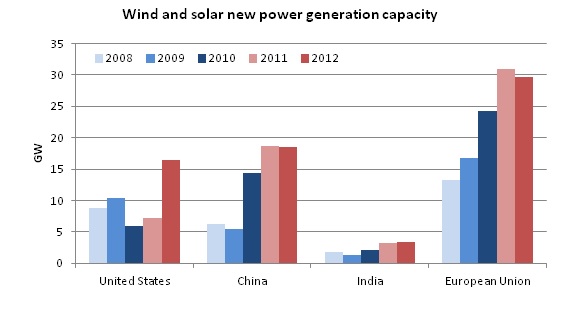 The trends noted in this overview resulted in an overall increase of CO₂ emissions (+1.4%), but also higher than the increase of energy demand (+1%). This is mainly due to the prevailing use of coal in the energy mix by the BRICS, accentuated by their growing influence in world energy demand. Moreover, the increased use of coal in the EU cancelled the growing share of renewable energies in its power mix. These two phenomena offset the CO2 emissions reduction registered in the United States from the accelerated coal-to-gas switch. The almost total shutdown of nuclear power in Japan and its substitution by fossil energy sources also contributed to increased emissions (+5.7% despite a decline in energy consumption by 3%). 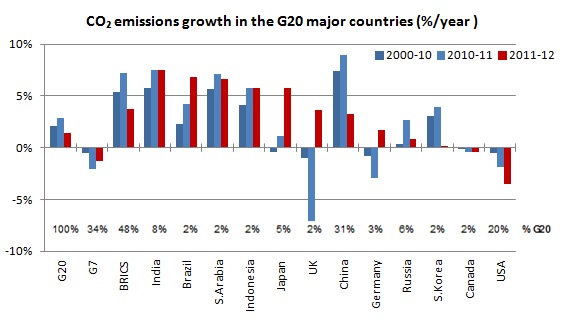