Coal phase-out: Towards a Major Shift?

20 Mar 2020
Has coal consumption peaked? Who is turning away from coal?

In a previous article published in 2019, we explained why global coal consumption was on the rise. Recent announcements by several governments on their coal phase-out plans, the advanced closure of old power plants and the freezing of some projects under construction may indicate a reversal of the trend for coal in the coming years. Do these signs herald the end of coal in the world?

Using Enerdata’s databases and information sources, we decipher the major global coal trends in the short and medium term. This brief was prepared by Bruno Lapillonne, co-founder of Enerdata and Carine Sebi, Chair coordinator at Grenoble Ecole de Management.

Decrease in 2019 of coal consumption worldwide: a decisive turning point

According to Enerdata's latest estimates, global coal consumption1 is expected to decrease by 1.3% in 2019 (compared to an increase of +0.9% in 2018). The reversal of this trend is mainly due to a significant drop in consumption in the United States (-9%) and Europe (-4%). In the United States, coal consumption reached its lowest level in 40 years, due to the closure of coal-fired power plants (15 GW of closed capacity in 2018), stricter emission standards and the availability of cheaper natural gas for power generation. In the EU, coal consumption has decreased for the seventh consecutive year due to climate policies, the development of other energies (renewables and gas) and an increase in the price per tonne of CO2.

Elsewhere in the world and particularly in Asia, coal consumption is still increasing. Driven by production growth in electro-intensive sectors (steel, cement and chemicals), China has been unable to reduce its coal consumption despite the slowdown of its economy, while Japan, at a time when industrialised countries are trying to reduce their CO2 emissions, is going its own way and is planning to build 22 new coal-fired power plants. This is one of the unintended consequences of the Fukushima disaster that forced Japan to end its nuclear power program.

By 2030, eight European countries will have turned away from coal

Outside the EU, the United Kingdom’s government has brought forward by one year its coal phase-out date, now scheduled for October 2024.

Figure 1: Coal phase-out plans and share of coal in the electricity mix by country 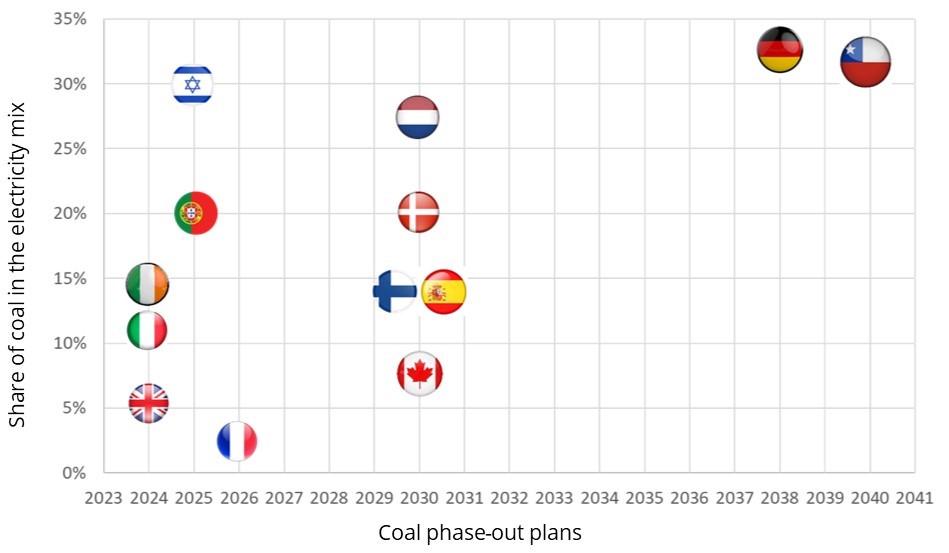 The number of coal-fired projects is continuously shrinking.

A closer look at the status of projects under construction reveals a growing number of coal-fired power plant cancellations. Of the additional global capacity expected by 2030 (i.e. 300 GW), 21% is frozen or cancelled (Figure 2), with a significant share in Asia (14% for China and India, for example). 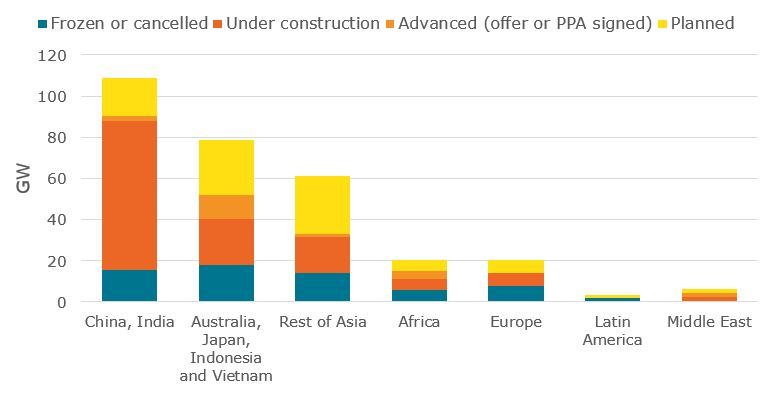 The largest coal-producing and consuming countries are reducing their dependence

The coal-producing countries have also begun a sharp reduction in the share of coal in their mix. South Africa, which produces 73% of its electricity from coal, will close nearly 30% of its coal capacity and reduce the share of coal in its installed capacity to 45% by 2030. Indonesia (60% coal in the electricity mix) plans to close and replace all coal-fired power plants older than 20 years with renewable plants, without specifying a timeframe. Similarly, Australia will close all coal-fired power plants (63% of its power mix) by 2040.  Finally, India, which is one of the countries most dependent on coal to produce its electricity (72%), wants to reduce this share to 50% by 2030.

Public and private investment banks are also unveiling their climate strategy and lending policy in the energy sector, which excludes financing for coal projects due to pressure from financial regulators and the risk of damaging their reputation. That is the case, for example, of the European Investment Bank, which will no longer support fossil energy projects (including natural gas) by 2021. In Japan, the investment bank MUFG, which is one of the world's largest lenders to coal, has pledged to stop financing such projects.

A slight turnaround that can be explained by various factors

In the "coal" news, there has also been an increasing number of closures of old (most polluting) coal power plants in recent times, often premature closures pushed by climate alerts, for instance in South Korea and the Netherlands, but also in China.

Unfortunately, the planned closures will not compensate for the projects currently under construction worldwide. If one compares the cumulative capacity of the power plants under construction with those that will be shut down, only Europe, Latin America and North America show a net decrease in coal capacity (see figure 3 below).

Figure 3: Aggregate capacity of coal-fired power plants closing and under construction by region 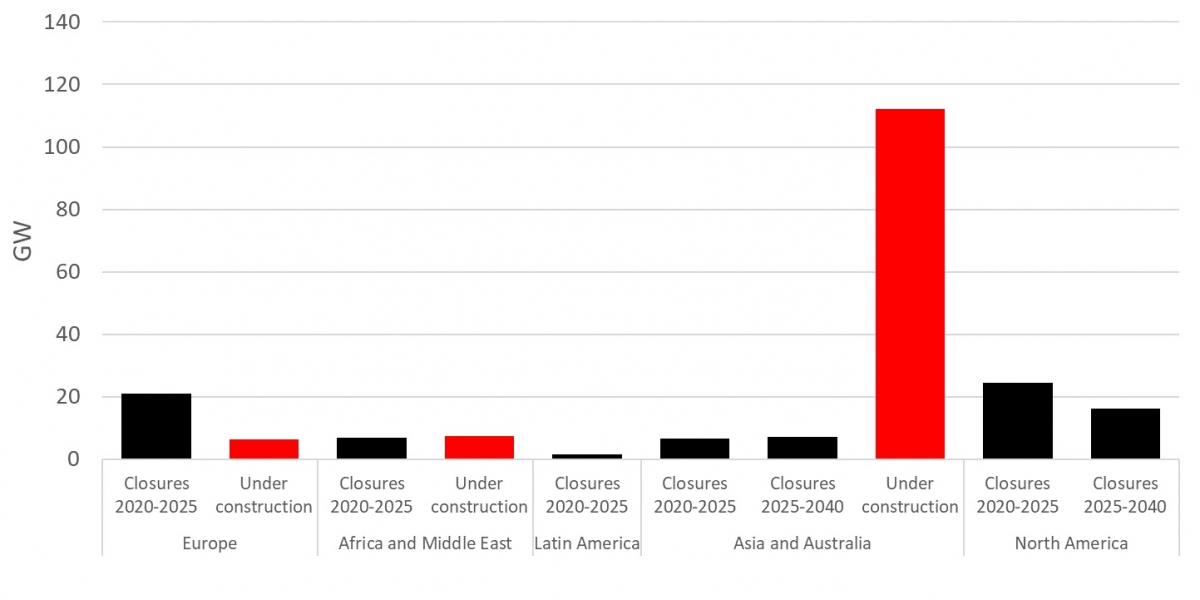 In other regions of the world, the reduction in coal power capacity or projects is rather due to the discovery of other resources or the substitution of coal by other energies. For instance, Morocco or Egypt are opting for gas imports, and Chile is planning a phase-out by 2040 with the closure of one third of its coal capacity by 2024. Israel also announced a definitive exit from coal by 2025 due to abundant gas discoveries. The decline in coal in the United States is explained by the development and abundance of another carbon-based energy, shale gas.

Pollution and climate alerts, as well as national energy plans, are pushing private actors to raise their awareness level and find new solutions. The Kenyan judiciary has decided to block a disputed project to build a coal-fired power plant (981 MW) in Lamu, a UNESCO World Heritage site.

Even if the closures of old coal-fired power plants will not compensate for future construction, the planned reduction in the share of coal in the electricity mix of the largest coal-consuming and coal-producing countries is certainly a sign that coal is starting to leave the world. However, despite all those good intentions, the reduction in coal consumption currently observed is also due to exogenous cyclical phenomena. It is the slowdown of the economic situation in India that in 2019 caused the first drop in coal-fired electricity production in ten years (-2.5%). In 2020, the Coronavirus epidemic continues to slow down the global economy, which will undoubtedly result in a drastic reduction of CO2 emissions.