Will electric vehicles be successful to mitigate the problems raised by the intermittency of wind?

Development of wind power has been important in recent years and this trend is expected to continue. More and more, this source of energy represents a significant share in the energy balances of several European countries. But variability of wind power remains a major challenge of this technology. For example, a wind turbine can start producing in the middle of the night when electricity demand is very low. Statistically, we can also observe that production of wind turbines is slightly higher at night than during the day. Electric vehicles are one of the solutions put forward to manage the wind energy variability. Thanks to their batteries, electric vehicles may offer an important reservoir at a country level. With 160 km autonomy, an electric vehicle can store up to 40 kWh. This energy is sufficient to run 4 days without recharging, assuming that a vehicle consumes 0.25 kWh per km and runs in average 40 km per day. Can electric vehicles make a significant contribution to manage the consequences of the variability of wind on the electricity system?

Wind generation versus storage capacity offered by electric vehicles: which orders of magnitude

Daily wind generation in Germany in 2011 and flat EV charging 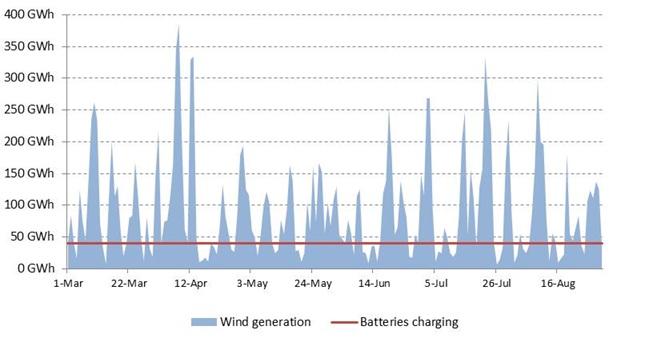 Indeed, there might be a smarter way to reload electric vehicles, by taking into account weather forecasts and anticipation of wind peaks. The purpose would be to make sure that the batteries of the vehicles are almost empty on average just before strong windy conditions, and can then be mostly reloaded during the windy period. This management assumes that people do not rush to reload every time they can, and accept sometimes to drive with batteries not fully loaded. Reload can then be optimized and synchronized to strong wind peaks. The graph below shows the results of such a better management in the German case study. The situation would improve slightly, however the largest wind production peaks still overcome by large the demand of electric vehicles. In this case, medium peaks are much better addressed, but the larger ones still raise problems. Indeed, when the wind is strong and lasts for several days, the first day can be smoothed effectively, but the days after not so much, as batteries are at least 75% full, limiting the opportunity to reload. Having several continuous days of wind is a common situation. In this case, there are still 20 days when available wind power on the grid exceeds by 150 GWh the daily electricity requirement to reload the vehicles. 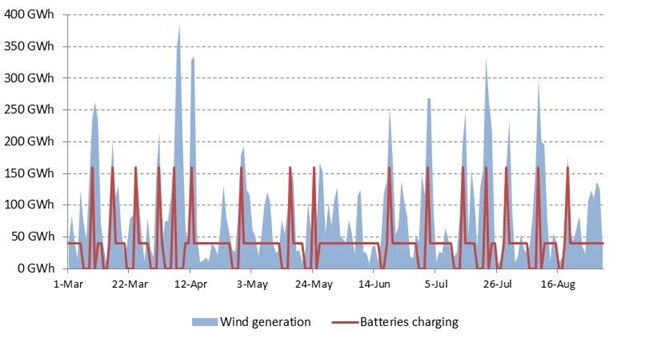 This can be even further improved if batteries are also used to store electricity for the grid: it can help implementing the smart loading management (batteries are discharged on the grid just before windy conditions), and it can help tapping more on wind electricity to reload the batteries (in particular in periods when wind intermittency is strong). Although the consequences of such a use of batteries have not been calculated in details, it seems that this would not change drastically the observations made above.

The German case described here suggests that the development of electric vehicles might not make a significant contribution to electricity supply/demand balancing problems in strong windy days, at least for the next 10 to 15 years, in countries with large wind power potentials. A clever management of batteries reloading, as well as a use of batteries to supply the grid at peak hours may improve the situation during this period, but probably not too much.

Discover the EnerFuture service: a long-term forecast (to 2050) of demand, prices, and CO2 emissions by sector and for all energies, plus power generation capacities and production levels by fuel. Three distinct scenario reflect different potential policy developments.